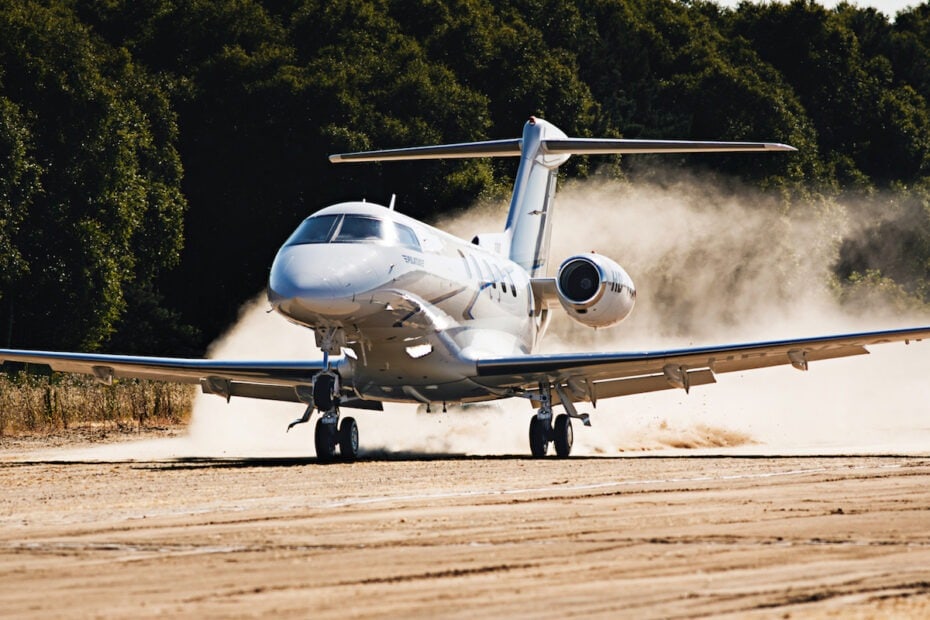 The Pilatus PC-24 and Embraer Phenom 300E are two extremely popular business jets. Both are single pilot certified, with similar range figures. However, there are some crucial differences.

The Pilatus PC-24 is the first business jet manufactured by Pilatus and it has been a tremendous success. Pilatus says that the PC-24 doesn’t fit into the regular business jet categories but rather its own, new category the SVJ – “Super Versatile Jet”. Pilatus gives it this name as it combines the versatility of a turboprop with the cabin size of a medium jet and the performance of a light jet.

On the other hand, there is the Embraer Phenom 300E, the latest version of the popular Phenom 300. Embraer has taken the Phenom 300 and listened to customer feedback. Following on from this Embraer has developed the 300E.

The Pilatus PC-24 is powered by two Williams FJ44-4A turbofan engines. Each engine is capable of producing up to 3,420 lbf each, resulting in a total thrust output of 6,840 lbf.

Consequently, both aircraft are capable of cruising at a maximum altitude of 45,000 feet.

When it comes to the maximum range of these two aircraft the numbers are nearly identical. However, the Phenom 300E once again just edges out the Pilatus PC-24 by 10 nautical miles.

In the real world this difference will not be noticeable. Theoretically these maximum range figures will enable the aircraft to fly non-stop from New York to Panama City.

However, please note that the official range figures of aircraft are in optimal weather conditions and minimal weight. Therefore, once you factor in a strong headwind and some passengers will luggage, these range figures will be reduced.

Despite this, both aircraft can comfortably depart New York and reach bits of the Caribbean without needing to refuel. However, a coast-to-coast flight of the USA is out of the question. Los Angeles to New York is not possible without refueling.

Performance on the ground is where the PC-24 really starts to shine. It is one of the many reasons that the aircraft is favored by the Royal Flying Doctor Service of Australia.

It is worth noting now that the Pilatus PC-24 has excellent engine performance at higher altitudes, for example at mountainous airports. This is one of the many reasons the PC-24 is so versatile. When operating at higher altitudes jet engines produce less thrust. Therefore, a longer take off run is required. As a result, the number of high altitude airports that private jets can operate out of is severely limited.

Therefore, it comes as no surprise that the PC-24 has a much shorter minimum take off distance than the Phenom 300E. The PC-24 can take off in a minimum distance of 2,930 feet compared with the minimum 3,209 feet of the Phenom 300E.

However, without wishing to take away this victory from the Phenom, take off distance is a more important figure. When an aircraft lands at an airport it must also take off. Therefore, there has to be a runway that can accommodate the minimum take off distance. Therefore, as long as an aircraft can land in a shorter distance than it can take off, the minimum take off figure is more important.

Additionally, the Pilatus PC-24 is capable of landing on dirt and grass runways. This is highly unusual in the world of private jets.

The benefit of this is that the Pilatus PC-24 is capable of reaching more airports than its competitors. For example, there are around 11,500 airports around the world that can accommodate an aircraft with the minimum take off distance of the PC-24. These airports all have paved runways. If you then expand acceptable airports to those that have only a grass, dirt, or gravel runway, the number of accessible airports reaches nearly 20,000.

Therefore, the ability to land on unpaved runways nearly doubles the number of accessible airports.

Given that the Pilatus PC-24 is in a larger jet category than the Phenom 300E, the cabin is larger.

One of the most notable differences between the PC-24 and Phenom 300E is the flat floor. The Phenom 300E doesn’t have one. However, that isn’t terribly unusual for a light jet.

Officially the Pilatus PC-24 can carry up to 9 passengers while the Phenom 300E can carry up to 10. However, it is unlikely that every seat will be filled. In order to achieve these numbers passengers would be required to sit on the belted lavatory or in the cockpit. Therefore, in the real world, these aircraft can carry the same number of passengers. Realistically their passenger capacity is six.

The PC-24 features soft leathers, rare hardwood cabinetry with fully bespoke designs. Once seated, the seats can swivel in multiple directions and the armrests on both sides can fold down, all making conversation within the cabin much easier.

Of course, when an aircraft is dubbed the Super Versatile Jet you expect that to apply to all aspects of the aircraft and the interior is no exception. The aircraft can be configured solely for cargo, medical evacuations (such as the Royal Flying Doctor Service), even a 10-seat configuration for commuter services. In the usual business jet configuration, you will commonly see either a six or eight-seat configuration.

Once inside the cabin passengers are able to connect to the airplane’s server with a phone, tablet, or laptop allowing them to follow the flight in Airshow, control the cabin lights, temperature and consume media on the server.

With power ports, USB sockets in the side pockets, cup holders, plenty of storage spaces, and a cupboard by the entrance – comfort is second nature in the PC-24. By the main entrance, one can option a fully enclosed externally serviceable lavatory for maximum comfort on a long flight, along with a door to close off the cockpit for maximum privacy in the cabin.

The feedback that Embraer received from customers was that they loved the performance, but the interior comfort could use some work. And that is exactly what Embraer has done with the 300E, claiming that the update features “a total redesign of the 300’s interior.”

Tables, window shades, seats, and ceiling panels have all been updated and redesigned. The low cabin altitude of 6,600 feet and quiet cabin noise level of just 75 dB will ensure that you can comfortably work or relax so that you arrive at your destination as refreshed as possible.

The new seats feature retractable armrest and thigh supports, along with tracks that allow for the cabin seats to pivot away from the side walls to increase the amount of shoulder room each passenger has, giving passengers even more space. The retractable armrests also create more space within the cabin, with the Phenom 300E featuring a slightly wider aisle than the previous generation 300.

Please note that there are many factors that influence the charter price of a private jet. However, rough hourly estimates can be provided.

The estimated hourly charter price of the Embraer Phenom 300E is $3,150.

As to be expected, the Pilatus PC-24 costs more to purchase than the Embraer Phenom 300E. However, not by much.

With only 142 Pilatus PC-24s currently in existence there isn’t too much data to find an accurate pre-owned price. However, much like the Pilatus PC-12, the PC-24 will holds its value extremely well.

In comparison there are 116 Embraer Phenom 300Es currently in existence. The early numbers suggest that a three year old example will cost around $8.25 million. Therefore, the Phenom 300E also holds its value extremely well.

The Phenom 300E should, therefore, retain nearly 90% of its original value three years after purchase. This is an astonishing figure compared with aircraft such as the Bombardier Challenger 350 or Dassault Falcon 7X.

When it comes to chartering the Phenom 300E is mostly likely the best choice for most people. Flying between large cities, such as New York to Miami or New York to Washington, the true benefit of the PC-24 will not be realized.

However, when it comes to purchasing one of these aircraft the Pilatus PC-24 offers something that no other private jet can. Being able to land on short, unpaved runways dramatically increases the mission flexibility of the PC-24.