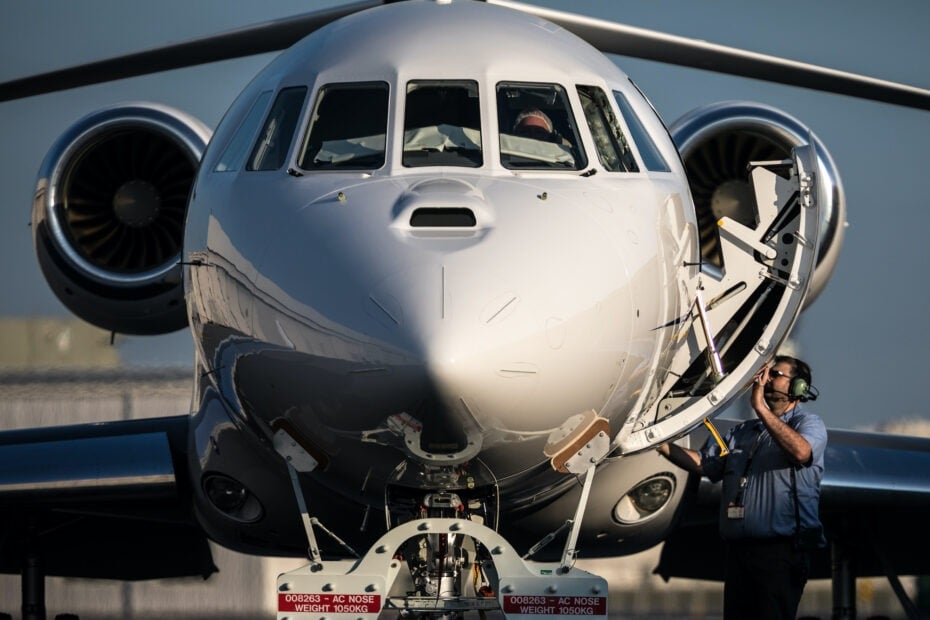 Private jet ownership is not for the faint of heart or those without multiple millions in the bank.

Not only can the process of purchasing a private jet be a complex process but it is certainly an expensive one.

When it comes to private jet ownership there are 10 main costs to consider. These are:

Following on from this a total estimation of the yearly price will be provided, along with the hourly cost. Click here to skip to the final number.

Additionally, in order to accurately put values to the costs, four aircraft will be investigated to produce the figures.These aircraft are a Pilatus PC-12 NG, Learjet 45XR, Bombardier Challenger 604 and Dassault Falcon 2000EX.

These aircraft have been chosen as they represent a diverse group. Aircraft for short and long journeys, of varying ages.

The example aircraft that we will be using to calculate the estimated annual private jet ownership costs are the Pilatus PC-12 NG, Learjet 45XR, Bombardier Challenger 604 and Dassault Falcon 2000EX. Their specifications are as follows.

The initial purchase price of the aircraft is easy to understand. This is the value that you actually pay to have the aircraft in your possession. All aircraft vary in price depending on type, age, condition, customization and so on.

New private jets vary in price from $3 million to over $70 million. However, in this example we will be investigating pre-owned aircraft. This is because around 85% of all private jets are purchased pre-owned.

Many customers seeking to purchase a private jet will obtain a loan in order to purchase their jet.

And, much like any money that you borrow, there will be interest to pay.

Aircraft financing, in its most basic form, is borrowing the additional cash that you require in order to purchase your jet. In doing so, the company loaning the money will charge you interest. The level of interest will vary depending on the company, economic climate, loan term and amount borrowed.

There are a variety of companies that support aircraft financing. For smaller aircraft you can even use a loan calculator. If you know the interest rate that you are paying you can calculate for a jet here.

However, in this scenario we will use some numbers that are typical within the industry. In this case we will assume a 25% down payment on the aircraft. Furthermore, most private jet owners change their aircraft every 4 or 5 years. Therefore, we will use 60 months as our loan term.

Interest rates vary depending on a variety of factors. At the time of writing, US Aircraft Financing offer a 3.35% interest rate on selected aircraft. However, for the purpose of this scenario we will use a more conservative 5% annual interest rate.

Therefore, if you were to not purchase the aircraft outright, the monthly costs would be as follows.

Private jet management is essential for nearly every owner. Unless you are willing to deal with all the admin yourself. However, that would likely reduce the amount of time that you save from flying by private jet.

Private jet management companies look after the aircraft for you.

They make sure that the aircraft is maintained. They arrange the storage of the aircraft. Private jet management companies essentially ensure that your aircraft is airworthy and ready to fly.

For example, Zenith aviation state that “we can hire pilots, manage their training, arrange all flights, perform maintenance and sell your aircraft for charter as required.”

If you own a jet or are thinking about ownership, jet management is essential. Furthermore, by employing a company such as Luxaviation, they are able to negotiate special deals on maintenance, insurance, fuel and more.

The total cost of the jet management will vary depending on how much you use it and the size of the aircraft.

For the purpose of this article, a blanket management price will be applied of $5,000 per month.

Maintenance of the aircraft is relatively self explanatory. All aircraft need to be maintained in order to be safe and airworthy.

And, of course, depending on the type of aircraft, the number of hours flown will vary significantly. Therefore, the following assumptions have been made.

Therefore, the estimated annual maintenance cost for our chosen aircraft are as follows, in thousands of dollars.

When you aircraft isn’t being flown it needs to be stored somewhere. Most likely at your local airport. Of course, there will be some nights that your aircraft is being stored away from base. However, those will not be considered in the annual storage cost.

This estimated cost will be working on the assumption that the aircraft spends every night back at base.

With storage there are two options. Inside or outside. It is assumed that if you have just bought a multi-million private jet that you aren’t going to store it out in the rain. So the hangar it is.

Depending on the airport that you wish to base the aircraft at you will pay different rates. In this scenario we will assume an average hangar cost.

The estimated annual hangarage cost for our example aircraft are as follows.

As is the case with everything in aviation, costs depend on a variety of factors. Additionally, costs differ in virtually every scenario. Insurance is the epitome of that statement.

Insurance is also crucial to aircraft ownership. And, as you would expect, private jet insurance can be a minefield.

Essentially there are two forms of insurance that are required if you own a private jet. Hull insurance and single limit liability insurance. Be aware that there are many nuances to this statement. Such as smooth limits versus sub limits.

However, for the purpose of calculating private jet ownership costs, we will keep it to just hull insurance and single limit liability insurance.

The estimated annual insurance cost for our example aircraft are as follows.

You are going to need someone to fly your aircraft. The crew expense is one of the largest annual costs of owning a private jet. In some cases you can get away with just one pilot – think turboprops, VLJs and light jets.

However, with aircraft like the Falcon 2000EX and Challenger 604, two pilots will be required. With larger aircraft you may even require three crew members on long flights.

Crew sourcing and training is something that can be arranged by your private jet management company. Crew costs vary depending on region, aircraft type and aircraft size.

The general rule of thumb is that the larger the aircraft, the more expensive the crew.

The estimated annual crew costs are as follows. Please note, the following values do not take into account any crew overnight fees.

Fuel cost is the most significant cost of owning a private jet. It is also the most dependent on the number of hours flown per year.

Assuming that each gallon of fuel costs $4.25, accurate estimates can be found based on the estimated number of annual hours mentioned earlier.

The estimated annual fuel cost per aircraft is as follows.

The number of upgrades available within the aviation industry is virtually infinite.

Cabin configurations can be changed. Paint jobs can be updated. Cockpits can be upgraded to the latest technology. Cabin’s need to be refurbished.

Upgrades are mostly optional and depends on what you as an owner want to achieve. It depends on the type of missions that you fly. It also depends on the budget that you wish to allocate to upgrades to your aircraft.

As estimates are optional and bountiful, a blanket estimate can be applied to all aircraft. Therefore, it is estimated that annual upgrade costs will total $100,000 to $500,000.

So, what is the total annual cost of private jet ownership?

In order to calculate the following figures, a series of assumptions have been made. For example, number of annual hours, fuel prices and crew.

However, fairly accurate figures have been generated. Please note that the final numbers are assuming that the aircraft has been purchased outright, without loan finance. Furthermore, it is assumed that each aircraft has $100,000 spent on upgrades per year.