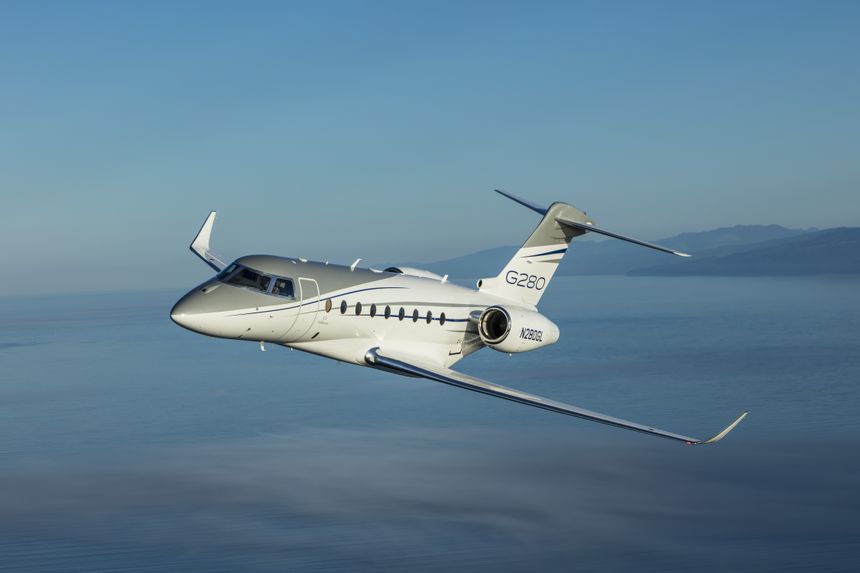 The Bombardier Challenger 350 and the Gulfstream G280 are the entry level jets for both manufacturers. Note that for Bombardier this statement applies from the end of 2021, when the Learjet lineup of aircraft ends production.

These aircraft are have a number of similarities. However, they are fundamentally different, with the G280 ultimately providing greater mission flexibility.

The Bombardier Challenger 350 is powered by two Honeywell HTF7350 turbofan engines. Each engine can produce up to 7,323 lbs of thrust. This allows the Challenger 350 to cruise at a maximum altitude of 45,000 feet.

On the other hand the Gulfstream G280 is powered by two Honeywell HTF7250G engines. Each engine is capable of producing up yo 7,624 lbs of thrust. And, just like the Challenger, is capable of cruising at a maximum altitude of 45,000 feet.

However, given that the G280 is part of the Gulfstream family, it is fast. Not as fast as the rest of its family but fast for its size. An interesting side note, the G280 isn’t actually produced by Gulfstream. Rather it is manufactured by Israel Aerospace Industries (IAI) and sold under the Gulfstream name.

When it comes to range, the G280 once again dominates the Challenger 350. You can visualize each aircrafts range using this map.

If you have read our other comparisons of the Challenger 350 (e.g. versus the Praetor 600, Legacy 500, Latitude or Longitude), you will know that the Challenger 350’s range allows it to fly from New York to London.

While the Challenger 350 will run out of fuel by the time it gets to London, the G280 is theoretically able to keep going until it gets to Prague. However, please note that these range figures are in optimal weather conditions with a low payload. Therefore, it is unlikely that these figures are attainable during a typical flight.

Consequently, this difference in range is even more important in the world if you wish to fly over the Atlantic. The G280 provides are greater margin of safety. The Challenger 350 can just about fly from New York to London. However, the cushion of fuel is far less than that of the G280.

Despite being able to fly faster and further than the Challenger 350, the G280 can also take off in a shorter distance. But only just.

The Gulfstream G280 has a minimum take off distance of 4,750 feet. Whereas the Bombardier Challenger 350 requires at least 4,835 feet to get in the sky.

Ultimately, it is unlikely that there will be situation in which the G280 can operate at an airport that the Challenger 350 can’t. Rather it highlights the impressive engineering that allows a larger, more capable aircraft to take off in less distance than the Challenger.

However, things change when looking at the minimum landing distance of these aircraft. The Challenger 350 can land in a minimum of 2,364 feet. The G280, on the other hand, requires at least 2,720 feet to come to a complete stop.

The most significant difference in the cabin dimensions between these two aircraft comes down to length. The G280 has an interior length of 9.83 meters while the Challenger 350 cabin ends after 7.68 meters.

Height is virtually identical, with the G280 providing 2 centimeters more headroom than the Challenger.

Gulfstream aircraft have some of the quietest cabins in the industry, along with some of the lowest cabin altitudes. However, the G280 is an exception to this rule. As a result, the Challenger 350 is a worthy competitor to the G280’s interior.

Additionally, the cabin noise levels within the G280 come to 70 decibels. This is just 2 decibels quieter than the Challenger 350. Again, not far off 67 decibels of the Cessna Citation Longitude. As a result, the Challenger 350 and G280 are very similar in their technical aspects of the cabin.

Cabin altitude and noise levels are important in reducing jet lag. A lower cabin altitude is always better. Combine this with a quiet cabin and you will feel more rested when you arrive at your destination.

And then, on top of all this, add in the fact that the Challenger 350 has a flat floor, something that the G280 doesn’t have. Consequently, on the inside at least, the G280 significantly differs from the rest of its family.

Features also include a fully flat floor, access to baggage during flight and exquisite finishes.

The G280 comes with the option to configure the cabin to seat up to 10 passengers and space for up to five passengers to sleep.

There are two cabin layouts that offer the maximum 10 seat capacity, one which features a double-club forward seating arrangement and four seats opposite a three -seat divan (note that only the two edge seats of the divan can be used for take-off and landing). The other configuration replaces the divan with two individual seats in the a single-club configuration. The club seats can be configured into beds, along with the divan.

At the rear of the cabin there is the fully enclosed lavatory, featuring a vacuum toilet, sink and closet to hang garments.

When you walk aboard the G280 you will first notice the galley which is located right opposite the main door. With standard features including cold storage, a coffee maker, ice drawer, hot/cold sink, solid surface countertop, lighted display compartment and a large waste container.

Price is a deciding factor for many when chartering a private jet. Therefore, the Challenger 350 may be preferable due to the lower estimated hourly charter rate.

However, keep in mind that every mission is different and there are many factors that can influence the price of a private jet charter.

When it comes to the list price of a new Challenger 350 or G280, the difference is extremely minor.

However, a factor that is important to consider with these aircraft is depreciation. Furthermore, with 85% of customers purchasing private jets in a pre-owned condition, the pre-owned price is a more important comparison.

At the time of writing there are approximately 390 Challenger 350s currently in service, compared with just over 220 Gulfstream G280s.

While the depreciation is significant for both aircraft (compared with the Praetor 600), the G280 is likely to hold its value ever so slightly better.

The Bombardier Challenger 350 and Gulfstream G280 are remarkably similar aircraft. Sure, the G280 can fly faster and further. However, the G280’s interior is compromised in a way that other Gulfstream aircraft aren’t.

Therefore, one must question whether the G280 is truly a Gulfstream. Of course, it wears the Gulfstream livery, however, with manufacturing being outsourced to IAI, it doesn’t have the all the qualities that you would expect from a Gulfstream.

Therefore, if you were chartering a jet from New York to Los Angeles, the Challenger 350 would seem like the better choice. However, the real difference between these aircraft will come down to price.

If you are looking at purchasing one of these aircraft the G280 is ultimately a more flexible aircraft. Although the Challenger 350 feels like a more modern aircraft.