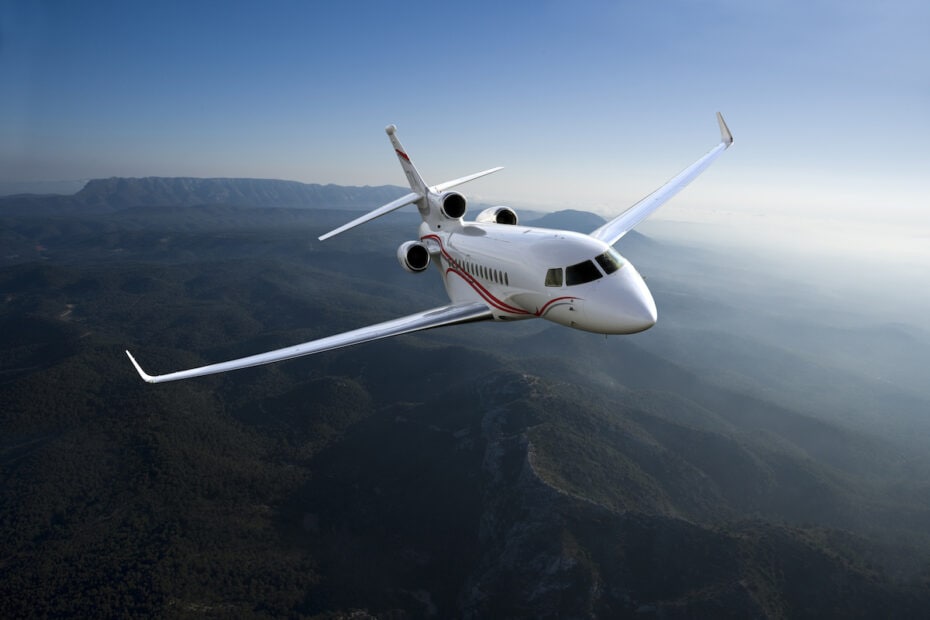 The Falcon 6X, Falcon 7X and Falcon 8X are the three largest business jets that Dassault currently manufacturer. These aircraft are capable of crossing oceans without issue. They have space for multiple living areas and can accommodate large groups of people.

However, what is actually different between them? Is one superior to the others? Is the 6X – given that it is the newest aircraft with deliveries due to start in 2022 – better than the tri-engine beasts?

On the other hand the Falcon 7X is powered by three Pratt & Whitney Canada PW307A engines, with each engine producing 6,400 lbf of thrust. Total thrust output 19,200 lbf.

And finally, the Falcon 8X. The 8X is powered by three Pratt & Whitney Canada PW300 engines. Each engine is capable of producing 6,722 lbf of thrust. Total thrust output 20,166.

All aircraft have a maximum cruising altitude of 51,000 feet.

On the other hand the Falcon 7X and Falcon 8X both have a maximum cruise speed of 488 knots. This highlights the thrust deficit that the 7X and 8X have compared with the 6X.

Next up is range and, as your would expect, the range of each aircraft follows a clear pattern.

Going from the Falcon 6X to the 7X and then on to the 8X, the range increases in a linear fashion. This can be visualized on this range map.

Of course, all these figures are enough for all aircraft to easily cross the Atlantic – flying from New York to London.

Take off distance of these aircraft also follows a very pleasing narrative.

Of course, these figures are to be expected. The larger, heavier aircraft with less power requires a longer runway than the lighter, more powerful aircraft.

The interior dimensions of these aircraft is somewhat surprising, especially considering that all aircraft (6X, 7X and 8X), can be configured to carry up to 16 passengers.

The surprise is that the interior dimensions due not follow the linear increase that the range and take off distance figures follow.

While the Falcon 8X has the longest cabin at 13 meters, the 6X comes a close second. The Dassault Falcon 6X has an interior cabin length of 12.3 meters. And finally, the aircraft here with the shorter cabin is the Falcon 7X with a length of 11.91 meters.

Furthermore, when it comes to interior width the 6X comes in as the widest cabin. The Falcon 6X has a 2.58 meter wide cabin compared with a cabin width of 2.34 meters for the 7X and 8X.

And finally, cabin height. A taller cabin will make it easier for passengers to stand up and will also make the cabin feel more spacious. Once again the Falcon 6X comes out on top.

Adding to this, the 6X also has the largest baggage capacity, with 155 cubic feet of space for luggage. The Falcon 7X and 8X can hold 140 cubic feet of baggage.

The air filtration system on the Falcon 6X keeps you breathing easier and gets fresh air into your lungs. The entire volume of cabin air can be refreshed in under three minutes. Furthermore, Dassault have been able to make the interior of the cabin have some of the lowest sound levels on the market. According to Dassault, the sounds levels are “below the level of normal conversation”.

A critical aspect of business jets is their connectivity to the outside world. The cabin can be controlled from your own personal device, allowing you to control lighting, volume level, and entertainment options. The connectivity onboard will make you feel like your at your own home or office.

Climate control onboard the 7X is capable of keeping the temperature to within one degree throughout the cabin. Air is humidified and refreshed.

The 7X features Dassault’s advanced cabin management system. This system provides you with entertainment and connectivity tools is a user-friendly way. FalconCabin HD+ allows you to control the cabin from your own mobile device.

Customization of the 7X can be extensive. For example, you can optionally equip a second lavatory or an onboard shower to keep you refreshed. Depending on your requirements, the 7X can carry 12 to 16 passengers.

The options for layout in this cabin go above and beyond any other business jet on the market. With three extra feet than the 7X to play with, you will be surprised with how much extra space is available. Why not opt for the three-lounge cabin with a shower in the rear and a crew rest area in the front? Or maybe you want a shorter entranceway so that you have more lounge space. Perhaps a large entranceway in order to accommodate spacious, lie-flat crew quarters and a larger galley in order to enjoy gourmet meals while you are in the sky.

While there are many factors that can influence the price of a private jet charter, estimated hourly prices can be provided.

The least expensive aircraft to charter of the three is the Dassault Falcon 7X which has an estimated hourly charter rate of $6,850.

And finally the most expensive aircraft is the largest aircraft of the three. The flagship Falcon 8X with a new list price of $58 million. (See the Falcon 8X compared with other flagship aircraft).

There are currently 293 Falcon 7Xs in existence. A 2018 example of the a Falcon 7X is estimated to cost $36 million. Therefore, after three years the 7X retains around 2/3 of its original value.

On the other hand, there are only 78 Falcon 8X aircraft in existence, with a 2018 example of the 8X estimated to cost $44 million. Therefore, the 8X retains around 3/4 of its original value after three years.

Clearly Dassault have manufactured each aircraft to fit within certain range brackets. Therefore if the 6X can’t perform the mission due to range limitations the 7X is available. If the 7X doesn’t have the range then the 8X is the aircraft to go for.

However, it’s not quite as simple as that. The 6X demonstrates the advancement in aviation in the past 15 years. The cabin of the 6X is taller and wider than the other two. It is a longer cabin than the 7X. The 6X is a quicker aircraft with a more modern interior. It even has a skylight!

Furthermore, when it comes to purchasing one of these aircraft, the 6X represents incredible value.

Therefore, if you were looking to fly from Los Angeles to New York and were choosing between these three aircraft, the Falcon 6X would be the one to go for.

Furthermore, it is hard to see how the Falcon 7X fits in Dassault’s lineup. The 7X seems to be in an awkward position between the 6X and 8X.

Additionally, one must question whether this is the end of the tri-jet era? Will all future Dassault aircraft be flying with just two engines? Hopefully not but a real possibility.