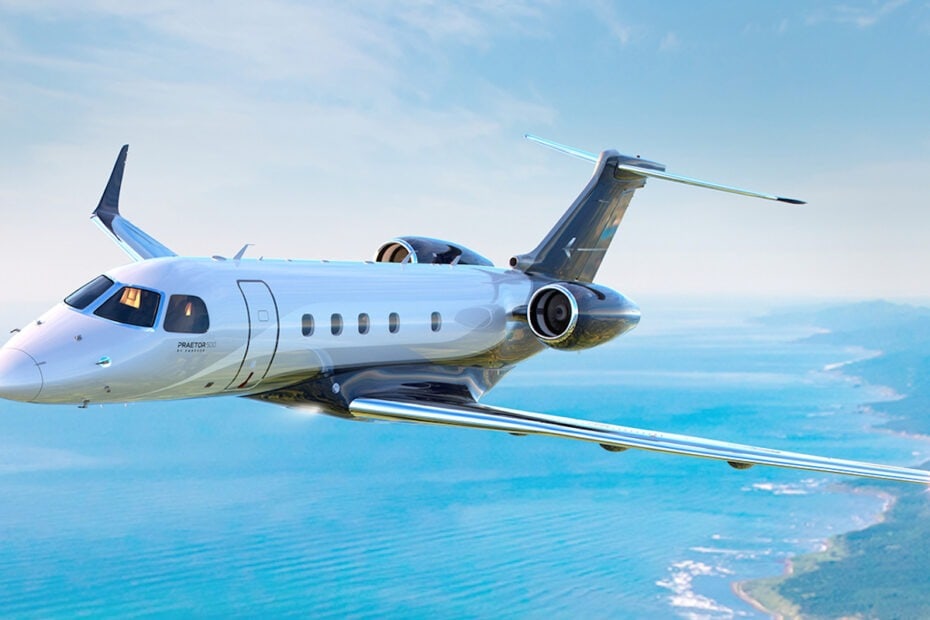 The Embraer Praetor 500 and Embraer Praetor 600 are two of the latest private jets to enter the market, with deliveries having started in 2019. Both aircraft have been described as “disruptive” by Embraer due to their impressive performance, comfort levels and value for money.

The aircraft, as the Praetor name suggests, are sister aircraft within the same family. And, unsurprisingly, the Praetor 600 is larger than the Praetor 500.

The Praetor series of aircraft are the successors of the popular Legacy aircraft from Embraer. The Legacy 450 and Legacy 500 have been replaced with the Praetor 500 and Praetor 600 aircraft, respectively.

Therefore, given that these aircraft are related, what are their differences?

Firstly, the performance of each aircraft.

Starting with the Praetor 500, it is powered by two Honeywell HTF7500E engines. Each engine is capable of outputting up to 6,540 lbs of thrust. Therefore, the resulting total thrust output is 3,080 lbs.

On the other hand the Praetor 600 is powered by the same two Honeywell HTF7500E engines. However, when bolted to the Praetor 600 each engine is capable of producing up to 7,528 lbs of thrust. Therefore, the total thrust output comes to 15,056 lbs.

Both aircraft are able to cruise at a maximum altitude of 45,000 feet. And, despite the Praetor 600 having a higher thrust output, both aircraft can cruise at the same maximum speed.

Given the sizeable number of similarities between these two aircraft, the area that they differ most is range.

The Praetor 500 has a maximum range of 3,340 nautical miles. This, therefore, allows the Praetor 500 to cruise non-stop from New York to London or London to Dubai.

This results in the Praetor 500 being able to fly further than competitors such as the Cessna Citation Sovereign+ and the Bombardier Challenger 350.

As a result, the Embraer Praetor 600 is able to fly non-stop from New York to Rome or Singapore to Sydney.

The minimum distance required for take off and landing is as you would expect.

These figures are exactly as one would expect given the size differences between the aircraft. The larger Praetor 600 requires a longer runway.

However, a difference of 500 feet when it comes to minimum take off distance is likely to go unnoticed in most scenarios.

When assessing the interior cabin dimensions of each aircraft it further highlights the fact that both aircraft share the same platform. Of course, that is no bad thing.

Both aircraft have the same measurements when it comes to interior width and interior height.

The interior width of both the Praetor 500 and 600 measures 2.08 meters. Additionally, the interior height of both aircraft measures 1.83 meters. This is almost exactly 6 feet tall.

As a result, most passengers will be able to easily stand up straight.

However, the measurement that these aircraft differ on is the length. The Praetor 500 measures 7.32 meters in length, compared with the 8.38 meter length of the Praetor 600.

The interiors of both aircraft are remarkably similar. Of course, this is to be expected given that they share the same platform.

The main cabin features 4 seats in a club configuration, with two forward facing seats just behind. Whether you are working or dining, the cabin’s stowable tables (made of carbon fibre) offer plenty of space for activities, opening flush with the side ledge – highlighting the excellent attention to detail and superb craftsmanship throughout the cabin.

The seats all recline and swivel, perfect if you wish to work alone or have a discussion with your fellow passengers. Of course, the seats can be converted into fully flat beds should you be flying during the night or fancy a nap.

The seats feature a stitch pattern which is said to be modeled after the stone walkways by Ipanema beach in Rio de Janeiro, with the silk and wool carpets designed to represent the ripples in the ocean during a perfectly calm day.

The highly functional galley will impress you with options, from a refreshing drink to a nourishing meal. Comprehensively equipped with a microwave, conventional oven, refrigerator, coffee brewer, and beautiful crystal, china, and silverware, the beautiful and functional galley makes your flight experience comfortable and fulfilling.

You will never be out of touch with the outside world when flying the Praetor 500 thanks to the state-of-the-art connectivity system – Gogo AVANCE L5 and Ka-band technology, making the Wi-Fi connectivity just as strong and reliable as the home or office.

Thoughtful design decisions have maximized the feel of space within the cabin. For example, the cabin’s stowable tables can be stowed away and completely hidden. When erected the tables open flush with the side ledge. This provides ample space for you and 11 other passengers (12 passenger capacity total).

The seats throughout the cabin can recline and swivel as you wish to get you sitting in the perfect position. Furthermore the plush seats can be effortlessly turned into comfortable, fully flat beds.

At the front of the passenger cabin, Embraer has integrated a luxurious stone-floored, highly functional galley. This has been designed to provide you all your desires as you are crossing oceans on a long flight. From warm coffee to a refreshing drink to a nourishing meal. Embraer has equipped the galley with a microwave, conventional oven, refrigerator, coffee brewer, and beautiful crystal, china, and silverware.

Being one of the most modern business aircraft in the sky, Embraer have left no stone unturned in regards to onboard technology. Home-like WiFi. Touchscreen cabin controls. Immersive audio and video streaming. Touchscreens are integrated into the overhead panels putting all cabin controls and information at your fingertips.

Embraer have developed an online configurator allowing you to spec out your own aircraft.

The difference in the estimated hourly charter price of these aircraft is stark. Please note that there are many factors that impact the charter cost of an aircraft. Therefore, these prices are only estimates.

In comparison, the estimated hourly charter price of the Praetor 600 is $8,000.

When it comes to purchasing these aircraft outright, each aircraft represents excellent value for money. However, keep in mind the overall ownership costs of a private jet.

Additionally, the Praetor 600 is estimated to have a market value of $18 million at the two year old mark. This, therefore, results in an 85% retention of value after two years.

These levels of depreciation are almost unheard of with private jets. For example, an aircraft like the Bombardier Challenger 350 decreases in value by around 40% after three years.

Embraer weren’t lying when they called the Praetor 500 and 600 disruptive.

Both aircraft demonstrate excellent value for money. Moreover, both aircraft are extremely capable.

Additionally, Embraer have developed the aircraft to suit almost every type of mission. If the Praetor 500 is unable to suit your range requirements then a Praetor 600 is ready and waiting.

This is much like the way that Cessna have positioned the Latitude and Longitude aircraft.

Boiling this comparison down into its most basic form, these aircraft are interchangeable. If the Praetor 500 is able to complete the mission, then that’s the one to go for. If it can’t then the Praetor 600 is the one to have.

It comes down to your range and passenger requirements. Other than that, these aircraft are just as excellent as each other.