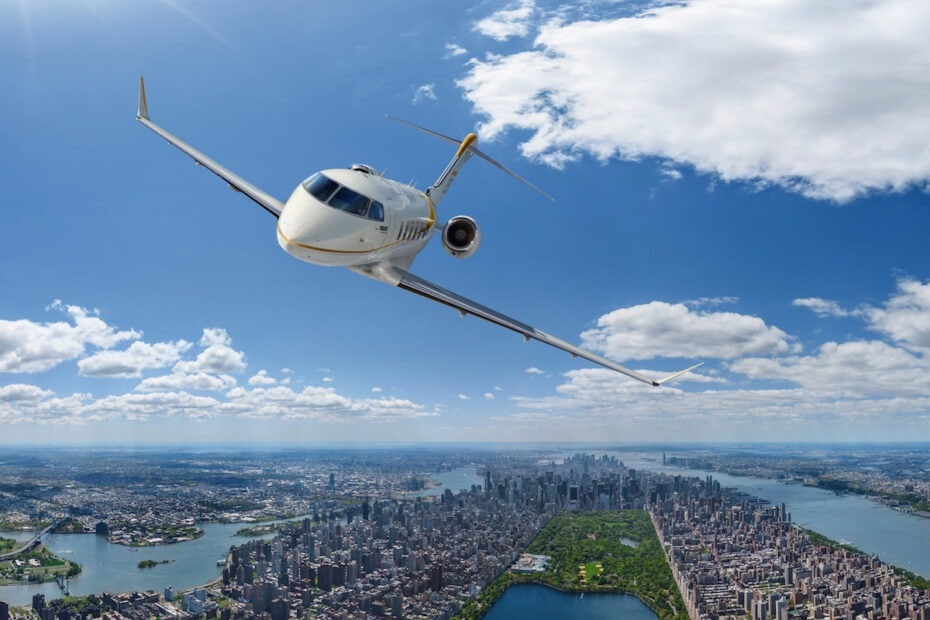 When presented with a choice between the Bombardier Challenger 350 and Embraer Praetor 600, at first it can seem like a difficult choice.

However, when looking at the facts and figures, along with the interior design, the choice starts to get a lot simpler. Therefore, this comparison between the Challenger 350 and Praetor 600 will identify which aircraft comes out on top.

First up in the battle between the Challenger 350 and Praetor 600 are their performance figures.

The Challenger 350 is powered by two Honeywell HTF7350 turbofan engines. Each engine is capable of producing 7,323 lbf of thrust.

The Praetor 600 is evenly matched with the Challenger, being powered by two Honeywell HTF7500E engines. Each engine is capable of producing 7,528 lbf of thrust.

Both aircraft are able to cruise at a maximum altitude of 45,000 feet.

However, their maximum cruising altitude is where the similarities end between the two aircrafts performance.

The Praetor 600 is capable of cruising at a maximum speed of 466 knots. In comparison, the Challenger 350 falls short of this figure by nearly twenty knots, resulting in a maximum cruise speed of 448 knots.

Will this speed difference be noticeable in the real world? Probably not. This difference in speed will result in the Praetor 600 being around five minutes quicker per 1,000 nautical miles flown compared with the Challenger 350. However, if you were to use these aircraft to fly a distance of 1,000 nautical miles per week, over the course of one year the Praetor 600 would save you over four hours per year.

While the Challenger 350 and Praetor 600 are closely matched when it comes to speed and altitude, the most striking difference is with their range.

In equal conditions, the Praetor 600 is able to fly over 800 nautical miles further than the Challenger 350 before needing to refuel.

This is likely to be a difference that you will notice in the real world. See how far each aircraft can fly using this range map.

Furthermore, these range figures are based off optimal conditions. Essentially this is with perfect weather and at most a couple of passengers onboard. As soon as you factor in a strong headwind or multiple passengers, the Challenger 350 is starting to fall short flying from New York to London.

Therefore, if you wish to fly transatlantic routes, the Praetor 600 is the aircraft to go for. Not only will it provide greater peace of mind but also greater flexibility.

Logic says that the larger aircraft with greater fuel capacity should require more runway to take off and land. However Embraer have managed to develop the Praetor 600 with a minimum take off distance of 4,717 feet. This is over 100 feet less runway required than the Challenger 350 which requires a minimum of 4,835 feet.

This is especially impressive given that the Honeywell engines on the Praetor 600 aren’t that much more powerful than those on the Challenger.

The competition remains close when it comes to the minimum required landing distance. And, once again, the Praetor is able to beat out the Challenger.

The Embraer Praetor 600 has a minimum landing distance of 2,165 feet. Compare this with the 2,364 feet required for the Challenger 350 to land.

When it comes to interior dimensions both aircraft have their strengths and weaknesses.

Both aircraft have the same cabin height of 1.83 meters which is just over 6 feet. Therefore, most people will find both interiors easy enough to stand up in. Additionally, both aircraft are able to accommodate a fully flat floor. However, this is to be expect of aircraft within this category.

On the inside, both aircraft have similar layouts. However, the Praetor 600 is able to carry up to 12 passengers while the Challenger 350 is limited to 10.

Additionally, the Praetor 600 has a low cabin altitude. Cabin altitude is an important metric as it makes a significant difference to the experience onboard. A lower cabin altitude will result in a more pleasant atmosphere and reduce the effects of jet lag.

As to be expected from an aircraft of this class the Challenger 350 gives you the ability to control the cabin from the comfort of every seat. The cabin management system of the 350 has been inspired by Bombardier’s flagship aircraft – the Global 7500. The cabin management system allows you to connect to your personal devices with a super simple user interface. Learn more about the Challenger 350 interior.

On the other hand with the Praetor, Embraer have demonstrated thoughtful attention to detail. Additionally, superior craftsmanship can be found throughout the elegantly conceived 6-foot-tall flat-floor cabin. Interior materials are of the highest standard, while also being durable and lightweight. For example, carbon fiber can be placed throughout the cabin. From bulkheads to tables you can make this aircraft your own.

At the front of the passenger cabin Embraer have integrated a luxurious stone-floored, highly functional galley. This has been designed to provide you all your desires as you are crossing oceans on a long flight. From warm coffee to a refreshing drink to a nourishing meal. Embraer have equipped the galley with a microwave, conventional oven, refrigerator, coffee brewer and beautiful crystal, chine and silverware.

Being one of the most modern business aircraft in the sky, Embraer have left no stone unturned in regards to onboard technology. Home-like WiFi. Touchscreen cabin controls. Immersive audio and video streaming. Touchscreens are integrated into the overhead panels putting all cabin controls and information at your fingertips. Learn more about the Praetor 600 interior.

Ultimately, both interiors are spacious, luxurious and practical. However, the Praetor 600 has a slight edge given its more modern design.

The estimated hourly charter price of each aircraft is where one of the most significant differences can be found. The Praetor 600 is more expensive the charter than the Challenger 350.

Please note that this is just the estimated hourly price and charter prices vary depending on a large variety of factors.

Furthermore, when seeking out pre-owned examples the Praetor 600 appears to hold its value far better.

Therefore, despite the aircraft being the same age at the time of purchase, the Praetor has lost just $3 million in value whereas the Challenger has lost nearly $10 million.

So, which aircraft is better? The Bombardier Challenger 350 or the Embraer Praetor 600?

In this comparison on almost every metric the Praetor 600 comes out on top. The Praetor can fly further, faster and take off and land in a shorter distance. Moreover, the interior is slightly larger with a lower cabin altitude. The Praetor 600 is one of the newest jets on the market, resulting in a modern, comfortable and efficient aircraft.

And to top it all off the Praetor 600 is less expensive to purchase and holds its value better than the Challenger.

However, if price is of a concern when chartering then the Challenger 350 makes a compelling case. The aircraft is a comfortable choice at a reasonable price. Additionally, seeing as the Challenger 350 has been in production for longer than the Praetor 600, there are more of them on the charter market.