How Much is a Private Jet from London to Dubai? 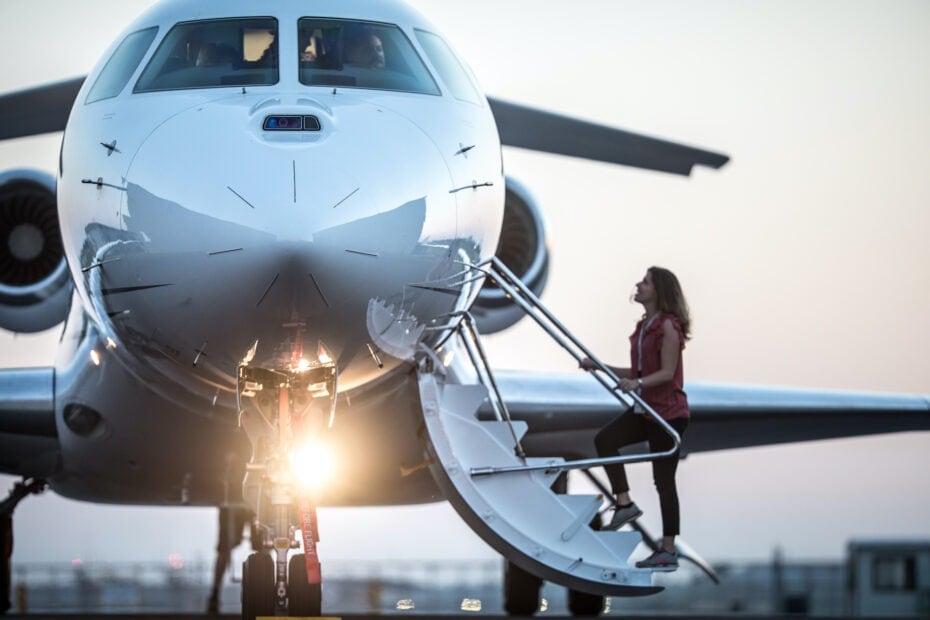 Flying by private jet from London to Dubai is one of the most popular long distance routes. Traffic is common in both directions.

People love to fly from London to Dubai due to the incredible architecture in Dubai, along with the all year round sun. Dubai is popular among business people, wealth individuals and influencers.

On the other hand, the route from Dubai to London is equally popular. People love to fly to London for the culture, history and royalty.

The route form London to Dubai is a popular long haul route, with a flight time of just under 7 hours.

Flying by private jet from London to Dubai is the ultimate way to travel. The total flight distance is 3,417 Miles (2,969 Nautical Miles).

This distance is within the capabilities of many business jets. From super midsize jets to VIP airliners, a wealth of aircraft will be able to carry you from London to Dubai.

Total flight time for this mission comes in just under 7 hours. The fastest aircraft to complete the journey are the larger Gulfstream’s and Bombardier Global aircraft.

Suitable aircraft for this route is anything in the super midsize category and up. Aircraft not suitable for this journey are turboprops, VLJs and light jets. That is unless you were willing to accept a fuel stop or two along the route. However, this is not advised due to a lack of comfort, increase in price and significant increase in flight time.

The aircraft that can complete this mission on a single tank of fuel will all be equipped with space to sleep, decent sized galleys and well appointed restrooms. These aircraft will mostly have lower cabin altitudes than commercial aircraft and a quieter cabin.

Of course, the most significant restriction for aircraft choice will be your budget. Naturally, prices for this route will vary depending on a wide range of factors. Furthermore, all aircraft have different costs per hour.

As you would expect, there are a wide variety of private jet aircraft out there. Especially when flying on a route such as London to Dubai, it is important to select an aircraft that suits your particular requirements – such as having a shower onboard.

London has one of the largest selections of airports suitable for private jets in the world. Seven airports are suitable to handle your mission, flying by private jet from London to Dubai.

The following London airports are suitable for your journey:

There airports that are available in London when flying by private jet from London to Dubai are as follows:

When selecting the airport that you wish to fly from, the key consideration is convenience. Choose based on which airport is closer to your starting or final location.

The purpose of a private jet is to reduce the overall travel time. This is achieved through flying to airports closer to your final destination, along with the fact that you only have to arrive for your flight 15 minutes prior to departure.

Following convenience the second factor to consider is cost. Every airport charges different landing and handling fees. For example, Farnborough and London City Airport will be among the more expensive. Luton and Biggin Hill will likely cost less for your mission from London to Dubai.

When flying to Dubai by private jet you will have the selection of four main airports. These airports are:

Again, you will want to choose your airport based on proximity to your final destination. For example, you could choose to arrive at Fujairah International Airport. However, the distance from Fujairah to the centre to Dubai is 125 KM (77 Miles). This journey takes over an hour by car. Therefore, all the time that you have saved flying by private jet will be eroded.

Much like flying from London, you airport choice will directly impact price. Some airports are cheaper to land at than others. Of course, there are a variety of other factors that will also affect the charter price of a private jet.

Please keep in mind that the price of a private jet charter flight is influenced by a variety of factors. Furthermore, all aircraft have different hourly rates.

The most cost effective option is to fly in a smaller aircraft. An aircraft like the Praetor 600 represents phenomenal value for money. The aircraft range is only a couple of years old. This means that it is equipped with all the latest technology and highly efficient. Furthermore, it is clearly a very quick aircraft.

Getting the Best Deals – Empty Legs

The most cost effective way to fly by private jet is by using empty legs. Empty legs are when an aircraft is flying a route with no passengers on board. Charter operators then sell this route for up to 75% off the usual charter price.

For example, say a customer book a charter flight from Dubai to London. However, the aircraft that they want is currently in London. In order for the aircraft to get to Dubai it has to fly. Therefore, as the aircraft is flying this route anyway, operators will sell this route to another customer for a discounted price. There are some compromises, mainly flexibility. Consequently, you have less choice over time and date of departure.

Seeing as the London to Dubai route is so popular, there is a high chance that you will be able to track down a convenient empty leg.

Alternatively, you could look at an aircraft that stops to refuel during the journey. This would add a few more hours to the journey but decrease the price to around £35,000.