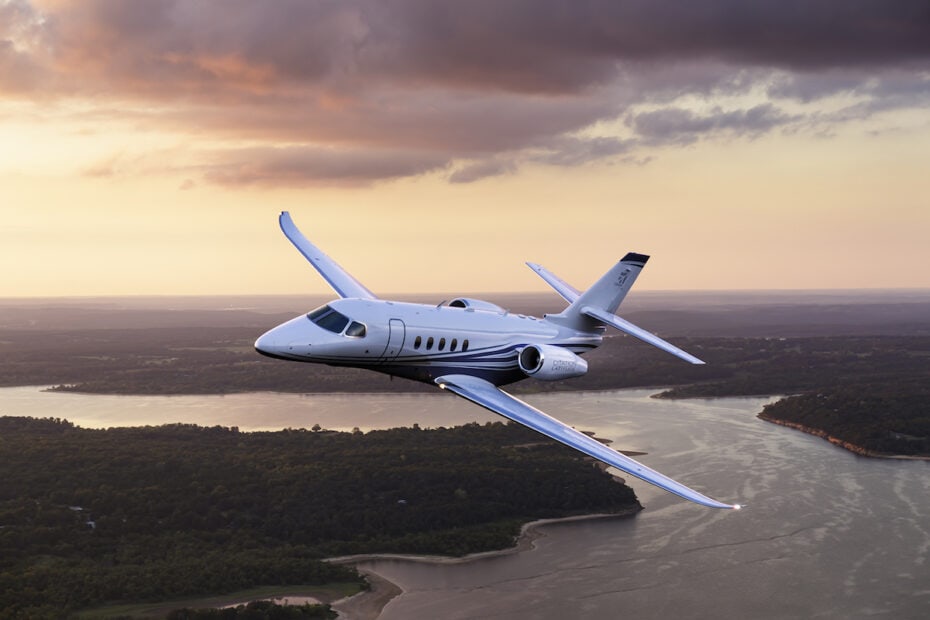 Despite the Challenger 350 and Citation Latitude being in difference aircraft categories (Large and Medium respectively), they are fair aircraft to compare. Moreover, it is a comparison that potential private jet customers have requested.

For example, if you are looking to fly from New York to Los Angeles, both these aircraft will be a viable choice. Therefore, how do you decide which one is better suited to your needs?

In this comparison between the Challenger 350 and Cessna Latitude, many variables will be considered. From factors such as performance (air and ground) and range to interiors and costs.

The Bombardier Challenger 350 is powered by two Honeywell HTF7350 turbofan engines. Each engine is capable of producing 7,323 lbs of thrust. This power is able to propel the Challenger to a maximum cruising altitude of 45,000 feet.

In comparison, the Cessna Citation Latitude is powered by two Pratt & Whitney Canada PW306D1 engines. The Latitude is slightly down on power, with each engine producing 5,907 lbs of thrust. Despite this, the Latitude can cruise just as high as the Challenger, with a maximum cruising altitude of 45,000 feet.

This is a difference that will never be noticed in the real world.

Comparing the range of these two aircraft is where the first significant difference in performance can be found.

While the Challenger 350 can fly up to 3,200 nautical miles without needing to refuel, the Latitude will need to refuel after 2,700 nautical miles. Use this range tool to visualize the difference.

This is a significant difference – one likely to be felt in the real world. The range difference between these two aircraft is Atlantic sized. The Challenger 350 is a transatlantic aircraft, the Cessna Citation Latitude is not.

The minimum take off distance of these aircraft will come as no surprise.

In comparison, the Latitude features a fully electric door. The electric door is large and easy to climb up. As a result, getting in and out of the aircraft is extremely easy.

Cessna have provided passengers on the Latitude with the ability to stay connected during the flight. A state-of-the-art cabin management system allows customers to control the cabin from the comfort of their own seat. Furthermore, the wireless cabin management comes as standard and allows for access to digital media, moving maps and satellite radio.

The rear of the cabin features a spacious and customizable lavatory. According to Cessna, the rear lavatory is 60 percent larger than its closest competitor. Cessna describe the lavatory as “exceptionally spacious”.

The estimated hourly charter price of each aircraft is an interesting topic. Of course, depending on the mission profile prices will vary. This is because there are a number of factors that influence the hourly price of a private jet.

Therefore, flying from New York to Los Angeles you would expect the Challenger 350 to be around 1/5 more expensive.

And finally, the purchase price of each aircraft. How much does it cost if you were to buy theses aircraft new from the factory.

The list price of a new Bombardier Challenger 350 is $26 million. In comparison, if you were to buy a new Cessna Citation Latitude you would expect to pay $18 million.

Therefore, if you are purchasing on the pre-owned market (where 85% of purchases are made), these aircraft are in direct competition. Moreover, the depreciation of the Latitude is not as significant as the Challenger 350. In just three years the Challenger 350 is expected to lose almost half its initial value. Whereas the Latitude loses less than 30%.

So, which is best? Which aircraft should you choose – the Bombardier Challenger 350 or the Cessna Citation Latitude?

Therefore, if you are looking to purchase an aircraft a pre-owned example of the Challenger 350 demonstrates a great prospect. It is the same value as the Latitude but larger inside with greater range. This increases the mission versatility.