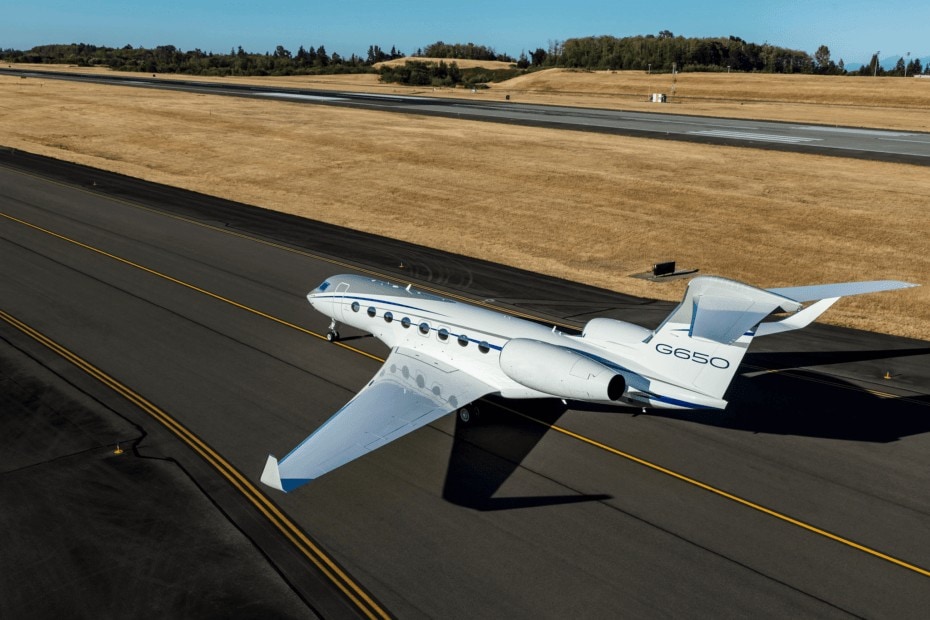 The Gulfstream G650 and Gulfstream G700 represent two of the largest private jets on the market.

When deliveries of the G650 began in 2012, it was Gulfstream’s flagship aircraft. The largest, fastest and longest range aircraft that Gulfstream currently produced.

This title was soon taken by the G650ER, when deliveries began in 2014, increasing the range to 7,500 nautical miles.

Therefore, how does the old Gulfstream flagship aircraft compare with the new one? Which aircraft should you choose to charter for your next intercontinental mission.

Firstly, how do these two aircraft compare when it comes to performance.

However, when it comes to fuel burn, the G700 has a clear lead.

While a difference of 500 nautical miles seems relatively minor, its the difference between making it from Los Angeles to Dubai non-stop or falling short.

Use our interactive range map to visualize the difference.

When looking at the ground performance of each aircraft, the figures are very similar.

A difference of just under 400 feet in minimum take off distance will most likely go unnoticed. Furthermore, it is unlikely that there will be situations in which the G650 is able to operate from an airfield that the G700 is unable to.

However, figures that are surprising are the minimum landing distance numbers.

Given that the G700 is a larger, heavier aircraft, a landing distance of just 2,500 feet is extremely impressive.

Given that these two aircraft are designed to comfortably transport you between continents, large cabins are a given.

Next, when it comes to interior width, both aircraft are identical. Both the G650 and G700 measure 2.49 meters in interior cabin width.

Additionally, the similarities in dimensions continue to height. Both aircraft measure 1.91 meters in interior height. As a result, most passengers will have ample headroom when moving around the cabin.

Consequently, according to Gulfstream, both the G650 and G700 can be configured to carry up to 19 passengers. However, whether these aircraft ever actually fly with maximum occupancy is another question.

Furthermore, the similarities continue when it comes to baggage capacity. Both aircraft are able to accommodate up to 195 cubic feet of baggage.

Given that first deliveries of these aircraft are 10 years apart, certain technological advancements have been made. However, the difference in cabin quality is not quite as dramatic as one might first expect.

However, despite the G700 being the latest flagship aircraft, representing everything that Gulfstream is capable of, it has a cabin altitude of 4,850 feet when cruising at 51,000 feet.

The G650 boasts a spacious interior – described as “a refined getaway above the clouds”. The cabin can have up to four living areas, enough to work, dine, entertain and relax.

These two factors combine to guarantee that the G650 is supremely comfortable. Additionally, low cabin noise, low cabin altitude, and 100% fresh air ensure that you will arrive at your destination with minimal jet lag.

With 16 of the trademark Gulfstream large, oval windows provide the cabin with an abundance of natural light.

Providing both comfort and productivity, Gulfstream’s handcrafted seats allow you to settle in and enjoy the journey. Each seat is positioned next to a window.

When circumnavigating the globe, as expected, the G650 is able to provide fully flatbeds for the passengers. All single seats and divan convert to beds, providing you with a good night’s sleep.

The aim of the G700 is to create the most comfortable environment possible in the sky so that you can sleep, work or relax as efficiently as possible. The G700 features true circadian lighting to simulate the sunlight of your next time zone to help reduce the effects of jet lag. Additionally, the G700 has a maximum cabin altitude of just 4,850 feet, one of the lowest cabin altitudes to be found on a private jet, helping you sleep better and reduce the effects of jet lag. Add in the extremely quiet cabin, you will have no trouble working, sleeping, or just relaxing.

Gulfstream has also fitted the G700 with twenty of the largest windows in business aviation, flooding the cabin with natural light to make the already large cabin feel even more spacious. As standard, the G700 features Jet Connex Ka-band Wi-Fi so that you can stay connected when you are in the air for hours at a time.

The G700 features an all-new seat design that is handcrafted for each aircraft and can be converted to ergonomic beds. The G700 has a maximum capacity of 19 passengers in a seating configuration and space for 13 passengers in a sleeping configuration. The cabin can be configured with up to five living spaces so you will always be able to get some privacy from your fellow passengers when on a long flight. See below for the various configurations you can have on a G700.

When it comes to chartering these aircraft the G650 is less expensive than the G700. However, please note that there are many factors that influence the price of a private jet charter. Therefore, prices will vary depending on the mission.

Crucially, the retention of value of the G650 is extremely strong.

According to Aircraft Bluebook, a ten year old G650 has an estimated pre-owned value of $54 million.

Therefore, over ten years of ownership, the aircraft is only worth $11 million less than its original purchase price.

Of course, given that deliveries of the G700 are yet to begin, there are no pre-owned values for it. However, it is extremely likely that the depreciation will follow a similar curve to the G650 and G650ER.

So, which aircraft is best?

Technically speaking, the G700 is the better aircraft.

Sure, the G650 outperforms it in some aspects, such as maximum cabin altitude and minimum take off distance.

However, in terms of latest interior and cockpit technology, along with the incredible 7,500 nautical mile range, the G700 is the clear victor.

Although, if making a charter or purchase decision, money plays a crucial role. Given that the G650 is available now and holds its value extremely well, it still demonstrates a tempting proposition.