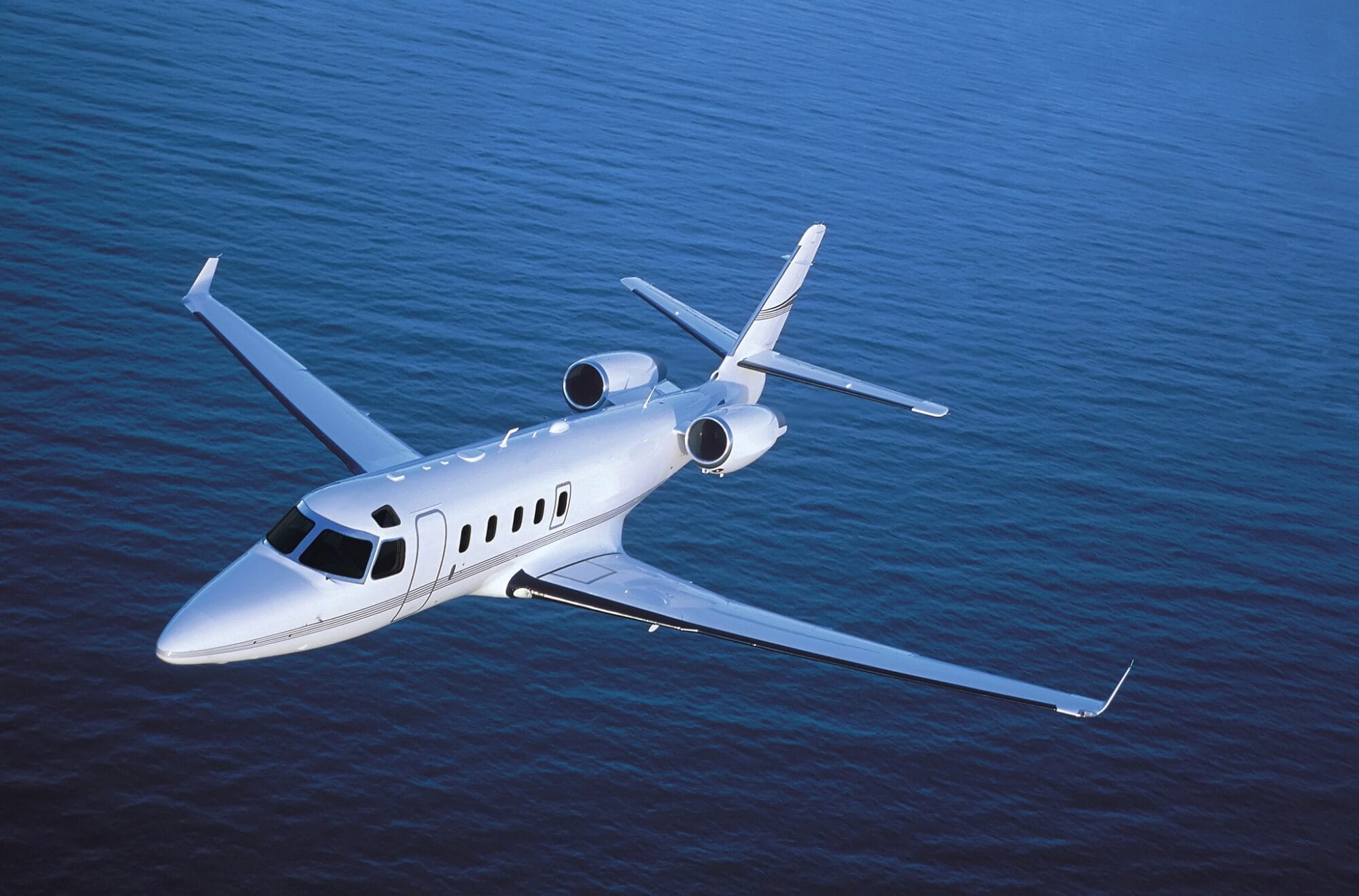 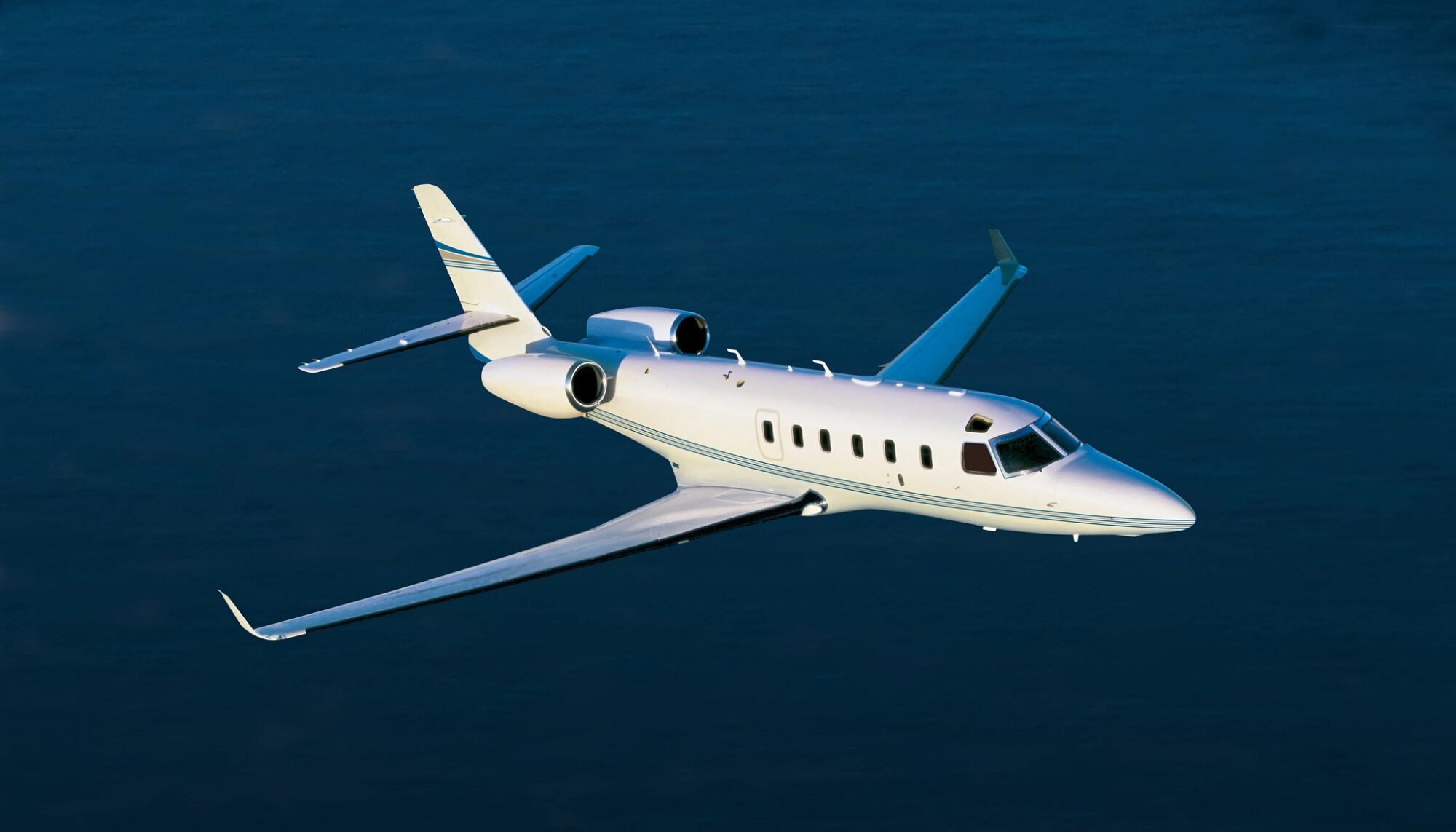 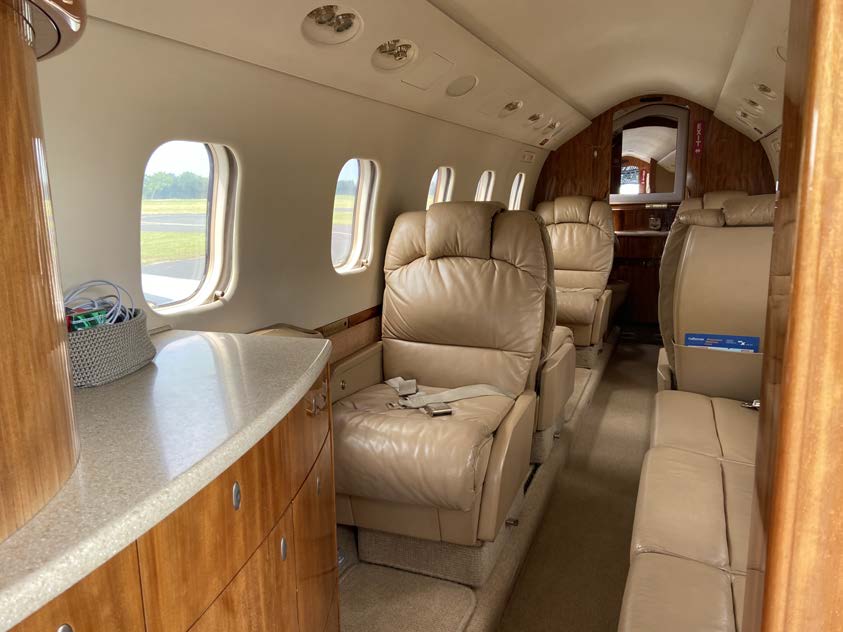 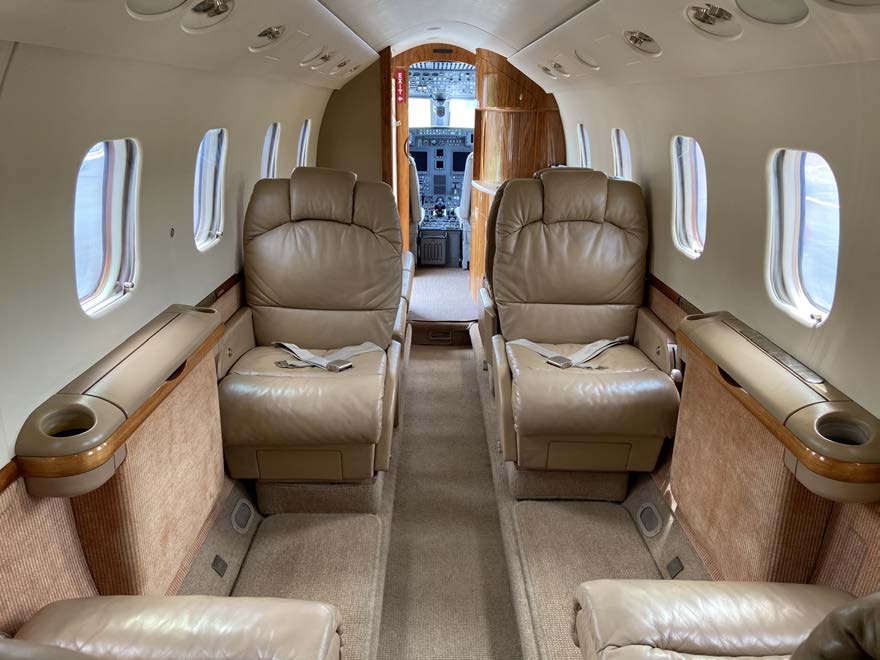 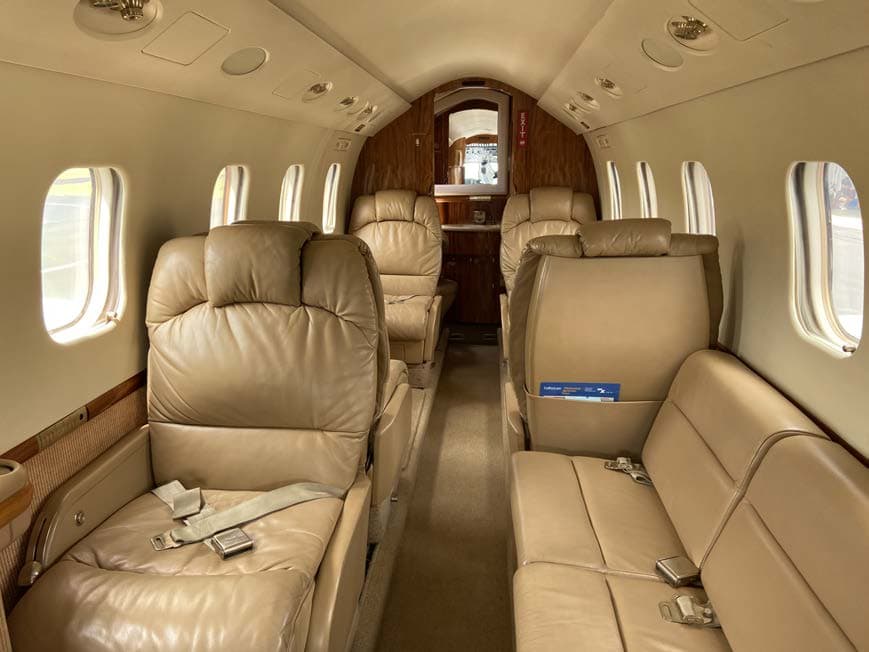 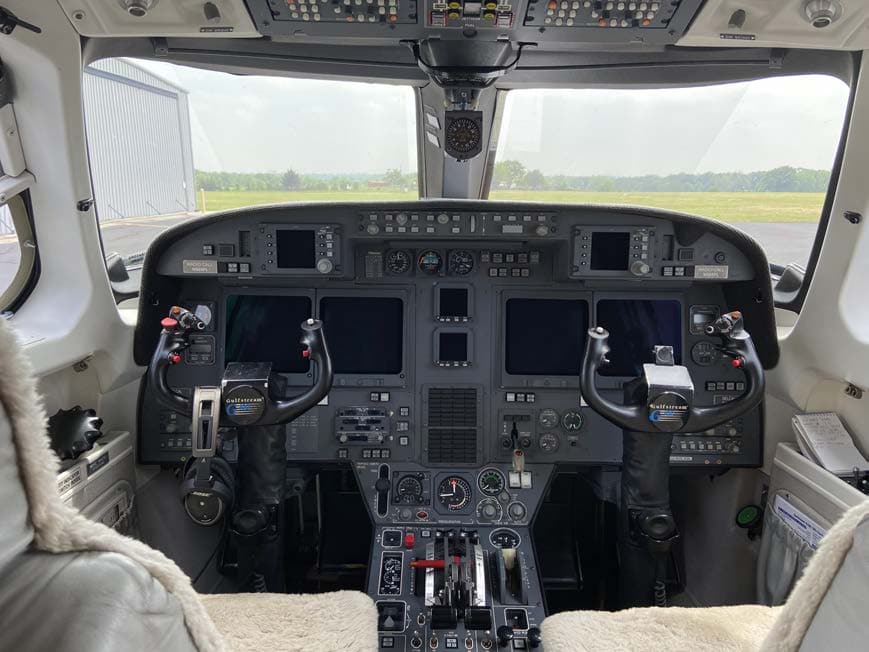 The Gulfstream 100 was designed to fly long distances at high speeds. It can easily complete nonstop trips from Seattle to New York or from Singapore to Tokyo and has a maximum cruise speed of .84 Mach. It lives up to the standards of reliability and high performance in private jets that Galaxy Aerospace Corp and its owner, Israel Aircraft Industries, have come to be known for.

The G100 comes equipped with two Honeywell TFE731-40R-200F FADEC equipped turbofan engines. Each engine is rated for 4,250 pounds of thrust at sea level. Noise levels on takeoff are 79.1 EPNdB. With these engines, the G100 needs 5,395 feet of runway to take off at sea level on a standard day. At an airport with a 5,000-foot elevation and a temperature of 25 degrees Celsius, this take-off distance increases to 8,700 feet of runway.

With four passengers on board, the G100 requires only 2,520 feet of runway to land. This private business jet is capable of climbing to an altitude of 37,000 feet in just sixteen minutes and features a maximum certificated ceiling of 45,000 feet.

The G100 features an impressive range of 2,950 nautical miles, easily capable of flying transcontinental flights. If your business venture takes you to a more distant location, the G100 is capable of maintaining an airspeed of 430 knots at an altitude of 43,000 feet with a fuel flow rate of 1,144 gallons per hour in a long-range cruise configuration.

For a swifter flight, the G100 is capable of maintaining an airspeed of 470 knots at an altitude of 41,000 feet with a fuel flow rate of 1,432 gallons per hour in a long-range cruise configuration.

The cabin of the G100 measures 17.1 feet in length, reaches 5.6 feet in height, and stretches a maximum width of 4.8 feet, with a floor width of 3.7 feet. The cabin of the G100 is usually configured to accommodate seven passengers but can seat as many as nine. Amenities designed into the G100 include power outlets, an enclosed lavatory, and a galley.

If the G100 is fitted with an extension fuel tank, this private business jet offers 42 cubic feet of baggage storage capable of accommodating 370 pounds of luggage. Without this fuel tank extension, this storage capacity increases to 55 cubic feet. With a maximum pressure differential of 8.8 psi, the G100 is capable of maintaining sea-level cabin conditions at an altitude of 23,000 feet.

The G100 comes standard with a Collins Pro Line 4 avionics suite. This avionics system utilizes four 7.25 by 7.25-inch liquid crystal displays in a T arrangement. Designed to be as efficient as possible, systems are grouped by function with the display screens in close proximity to the functions they control.

Some of the avionics systems incorporated into this suite include a Collins TWR-850 Doppler weather radar, and Allied Signal GNS-XES Flight Management System (FMS), and a dual-channel Integrated Avionics Processor System (IAPS).

The cost to charter this jet starts at around $4,300 an hour. Hourly charter rates do not include all taxes, fuel, and other fees. Charter costs will vary based on year of make/model, schedule, routing, passenger & baggage totals, and other factors.

The acquisition cost for this jet typically ranges from $5-10 million. The price of a jet depends on the production year; it can also go above the given range if the production is new. It will cost buyers around $1 million per year which includes fuel, crew members, and maintenance, etc. The price of a pre-owned aircraft can be within $2-5 million. There are numerous sellers available on various sites. 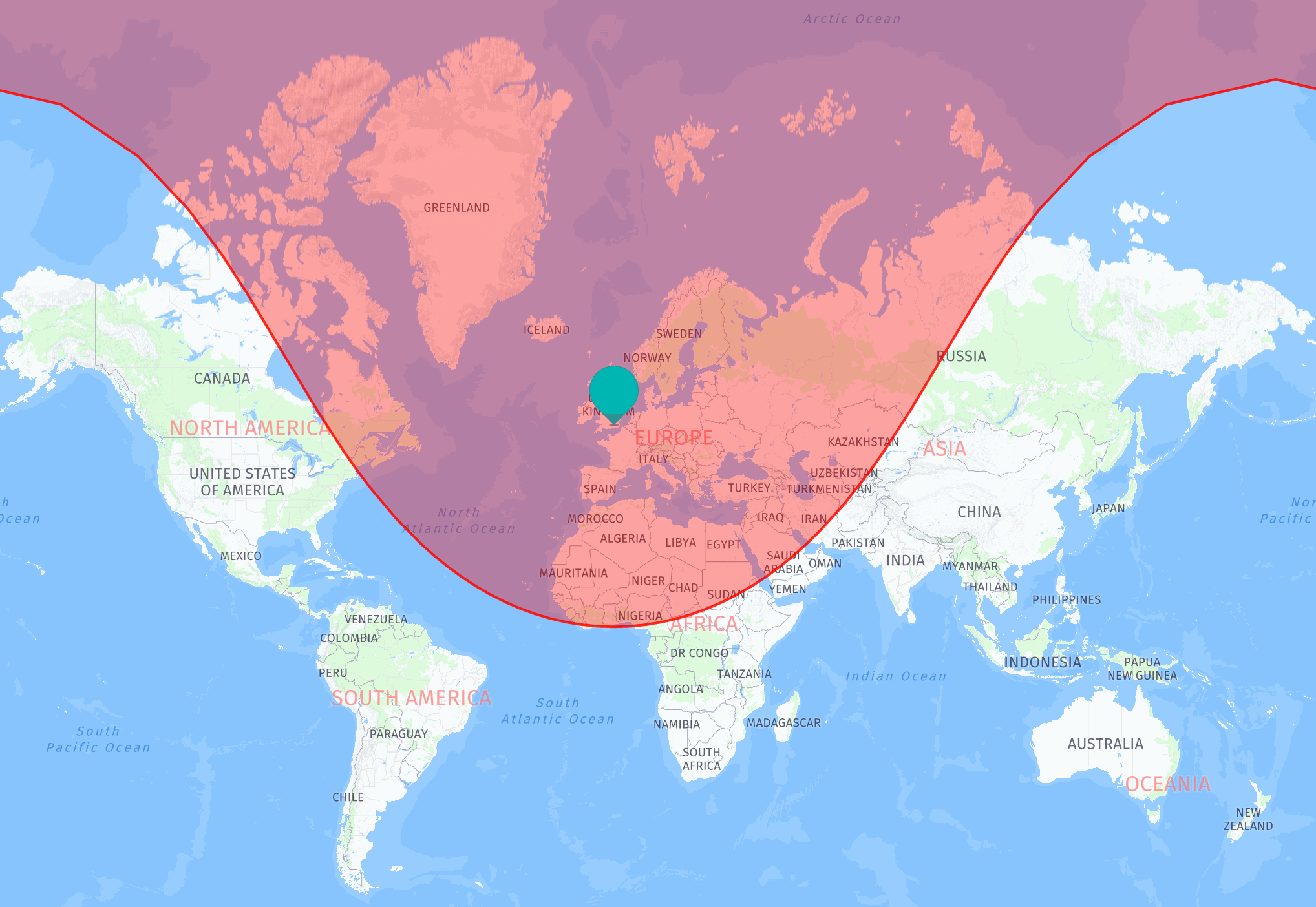