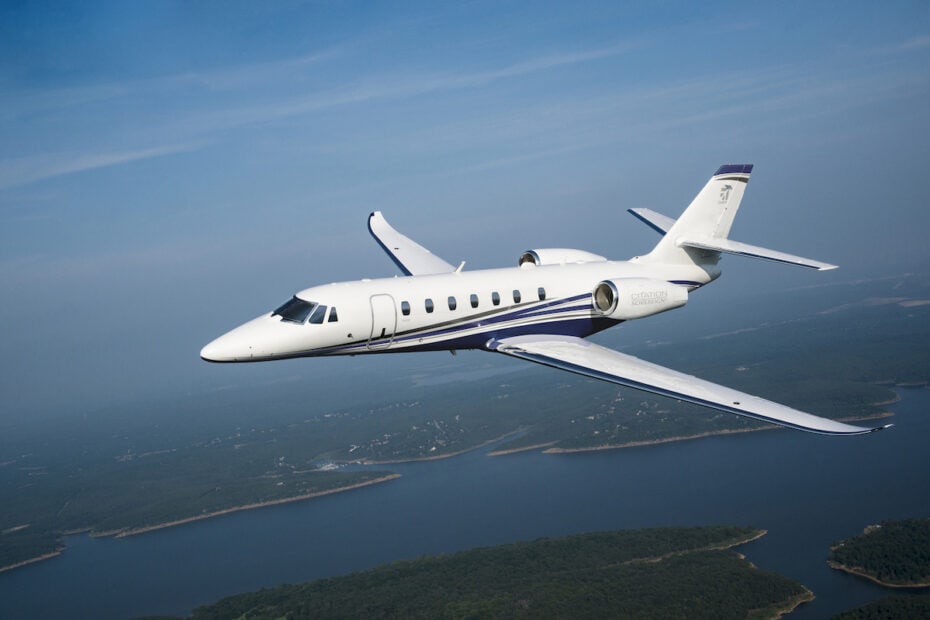 Deliveries of the Cessna Citation Sovereign+ began in 2013, with deliveries ending in 2021. 100 Sovereign+ aircraft are currently in active service.

The Sovereign+ can accommodate up to 12 passengers, with a maximum baggage capacity of 135 cubic feet.

When in its optimum configuration, the Cessna Citation Sovereign+ can cruise non-stop for up to 3,200 nautical miles (3,682 miles / 5,926 km). However, when configured for the fastest cruise speed, the Sovereign+ can maintain a cruise speed of 460 knots.

The Cessna Citation Sovereign+ can cruise at up to 47,000 feet. Additionally, the Sovereign+ has an average hourly fuel burn of 247 Gallons per Hour (GPH).

Thanks to its Pratt & Whitney Canada PW306D engines, the Sovereign+ has a total thrust output of 11,814 lbs.

In terms of cost, the Sovereign+ has an estimated hourly charter price of $4,400. Furthermore, back when deliveries of the Cessna Citation Sovereign+ began, the list price for a new example was $19 million.

Jump straight to the total cost table of the Cessna Citation Sovereign+.

When it comes to operating the Cessna Citation Sovereign+, there are two expense categories to consider – fixed costs and variable costs.

The estimated annual fixed cost for operating the Sovereign+ is $506,621.

Therefore, the estimated hourly variable rate for operating the Cessna Citation Sovereign+ is $2,437.

The table below details the estimated cost of each fixed cost for the Cessna Citation Sovereign+.

See below for a table of the estimated hourly variable costs when operating the Cessna Citation Sovereign+.

Use the calculator below to calculate the estimated annual budget to operate the Cessna Citation Sovereign+.

Simply enter the number of hours per year and receive click “Get Annual Budget”. Below you will then see the estimated annual budget for owning and operating the Sovereign+.