The Private Jet With The Longest Range 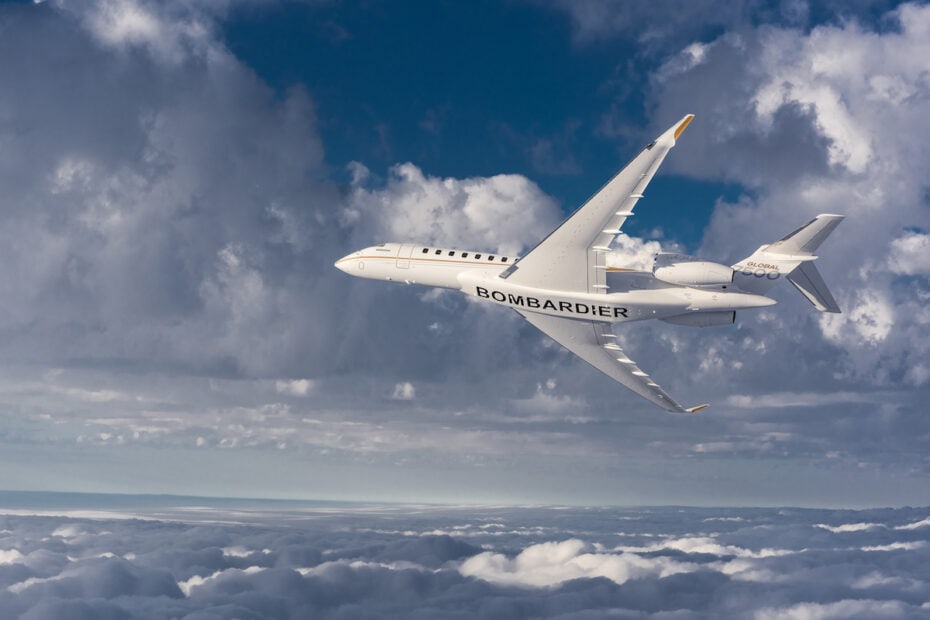 Have you ever wondered about the private jet with the longest range?

Private jets are a great way to travel quickly, comfortably and discreetly. However, with such a large variety of aircraft on offer – how do you pick the best one?

Well, a great way to start is by finding a jet that can actually get you from point A to point B. Ideally this would be without needing to stop and refuel.

Therefore, we have put together this list to showcase the five purpose built business aircraft that can fly the farther on a single tank of fuel.

Please note that this list is for purpose built business jets only. We are not counting converted airliners, such as the BBJ 747-8.

The range of the Global 7500 is so impressive that it in October 2019 it set a new record for the longest mission ever flown. An impressive non-stop flight from Sydney to Detroit, Michigan was the mission. The Global 7500 completed this flight in 17 hours non-stop.

The range of the Global 7500 is so impressive that it can easily connect virtually any two points of the globe without needing to stop.

Additionally, the Global 7500 is no slouch. It can cruise at a speed of 516 knots – also making it one of the fastest business jets in existence.

As you would expect from an aircraft that costs $73 million before options, the interior is top of the range. The Global 7500 has more natural light in the cabin than any other private jet. Bombardier’s Pure Air system provides 100% fresh air, while also being able to rapidly heat and cool the cabin.

The aircraft has space for up to four separate living areas. Consequently, the rear of the cabin has a private stateroom. The benefit of this – a full-size bed. This means that you can sleep properly during your up to 17 hour mission.

Additionally, a low cabin altitude helps to significantly reduce jet lag when you are crossing continents.

Furthermore, a full kitchen makes guarantees that you will be eating well across the Atlantic.

But what about the crew? Bombardier have been able to fit in a dedicated crew rest area to keep the crew operating efficiently.

The runner up to the Global 7500 and coming in second as the private jet with the longest range is the Gulfstream G700. The G700 is a new entrant to the market.

However, as you can tell from the rest of the aircraft on this list, Gulfstream know a thing or two about maximizing range.

The G700 is even similar in price – costing $75 million before options.

Much like the Global 7500, there aren’t many destinations that the G700 can’t reach on a single tank of fuel. London to Perth, Australia, Tokyo to New York, Dallas to Cape Town. The G700 can fly all these routes non-stop.

Like we saw with the Global 7500, it is imperative that the cabin is properly appointed to accommodate long missions.

Throughout the cabin passengers will find the signature oval Gulfstream windows. Twenty of them in fact.

Naturally the seats are handcrafted for each aircraft and can be converted into ergonomic beds.

Up to 19 passengers can comfortably be seated on the aircraft, with space for up to 13 passengers in a sleeping configuration.

The rear of the cabin can be used as a private stateroom with a full size bed for maximum comfort. Behind this is a full wash room, complete with a shower. This, combined with a low cabin altitude and 100% fresh air, will guarantee that you are ready to seize the day upon arrival.

If you are interested in a more detailed comparison of the G700 and Global 7500, check out our comparison here.

Both aircraft can cruise at a maximum altitude of 51,000 feet. And both aircraft can carry up to 19 passengers. However, the G650ER costs $70 million before options. $5 million less than the G700.

As you would expect from a Gulfstream, the G650ER is the gold standard for long range cruising.

The entire cabin can be controlled from a mobile app on your phone. This allows you to control the lights, temperature and more.

Imagine that. You could be lying in a full-size bed at the rear of the aircraft flying over the Atlantic and turn off the lights from your phone. No need to even get out of bed.

The G650ER can have up to four living areas to provide “a refined getaway above the clouds”.

Understandably one may wonder what the difference between the G650ER and G700 is. Both have the same performance right.

Well, the answer comes down to space. The G700 is a larger aircraft, as demonstrated by the ability to have one more living area over the G650ER.

Therefore, in terms of interior and raw performance, the aircraft are near identical. The key difference is range.

The G650 has 100% fresh air just like the G650ER. Additionally, both have a low cabin altitude, quiet, light cabins. Both can seat up to 19 passengers and sleep up to 10.

Technically speaking, the Dassault Falcon 8X does not belong in a list about the private jet with the longest range.

Furthermore, the Falcon 8X is a highly impressive aircraft.

The Dassault Falcon 8X has a maximum range of 6,450 Nautical Miles (7,423 Miles / 11,954 KM). This, for example, makes the Falcon 8X capable of flying non-stop from London to Singapore, New York to Dubai and Hong King to Salt Lake City.

The 8X is smaller than the other aircraft with a passenger capacity of 16. It can’t fly as fast – maximum cruise speed is 488 knots. And, obviously, can’t fly as far.

However, the interior of the 8X is stunning. Over 30 different layouts can be configured for this aircraft. The most common layout being to have 14 seats across the three living areas of the cabin. This provides space for 6 fully flat beds.

When flying at 41,000 feet the maximum cabin altitude is just 3,900 feet. The entire cabin can be controlled from your phone and, of course, a shower can be optioned for the rear of the cabin.

Crew rest facilities are available to keep the pilots operating at their best.

So, there we have it. The private jet with the longest range. As you can see, it is a close competition. Gulfstream produce the largest number of aircraft that can fly significant distance.

However, the with largest private jet that Bombardier have to offer they are able to claim the top spot.

If you wish to compare aircraft for yourself then you can do that here.