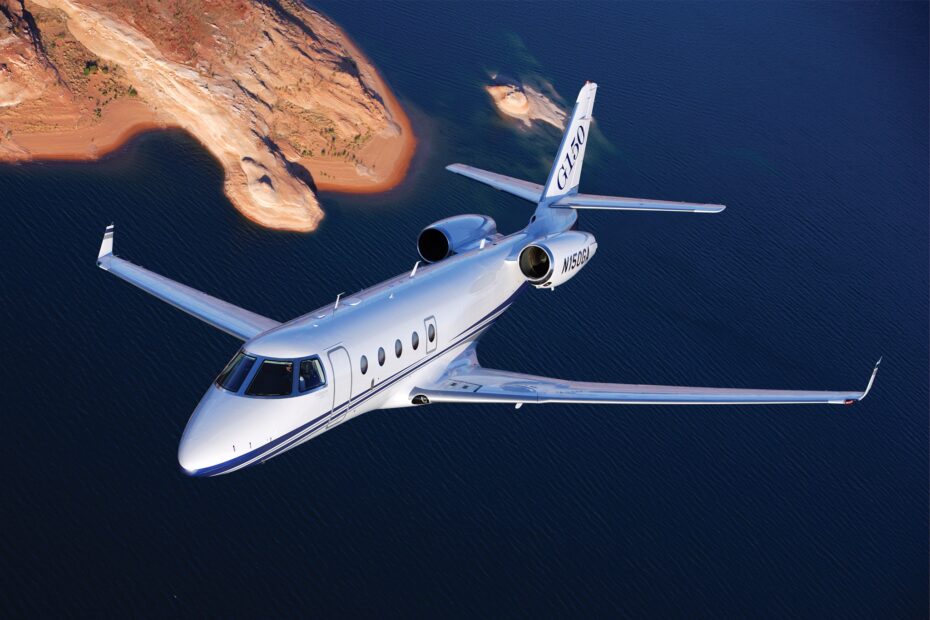 One of the main costs when flying by private jet is fuel. Simply put, private jets burn a lot of fuel when flying. However, a common question is wether private jets have got more fuel efficient over time?

In fact, a common assumption is that private jets are far more fuel efficient than they were 50 years ago.

However, when looking at the average hourly fuel burn of private jets, this isn’t necessarily the case.

Below is a graph that illustrates each aircrafts average fuel burn per hour during the cruise.

As you can see, hourly fuel burn figures haven’t changed that much over time.

You would typically expect to see a decrease in hourly fuel burn figures throughout the years. However, this simply isn’t the case.

Below is a table with all the aircraft with their hourly fuel burn figures, measured in Gallons per Hour.

When looking at individual aircraft categories, the evolution of private jets fuel efficiency is more pronounced.

As you can see from the graph below, large private jets have remained in roughly a similar bracket of fuel burn.

So, when it comes to large private jets at least, do they burn less fuel than they did 50 years ago?

Looking at the graph above the answer is no.

However, it is important to not only consider the capabilities of these aircraft over the years but also compare models.

In order to truly evaluate whether large private jets have got more efficient over time we must compare like with like.

For example, the Dassault Falcon 900. The basic ingredients of the Falcon 900 lineup has remained the same over the years. However, in 1985, the Falcon 900B burned, on average, 347 gallons of fuel per hour.

When deliveries started of the Falcon 900LX in 2010, the average hourly fuel burn of the aircraft was 260 Gallons per Hour.

Therefore, when looking at the fuel efficiency of specific aircraft models, fuel burn has reduced.

A similar story continues when looking at the fuel efficiency of midsize aircraft since 1970.

Average hourly fuel burn figures have remained in the same range. Most midsize private jets will burn between 200 and 280 gallons of fuel per hour on average.

There are, of course, some stand out examples.

For example, the Pilatus PC-24 burns just 160 Gallons per Hour on average.

However, the majority of midsize private jets fall within the same range throughout the years.

Interestingly, when it comes to light jets, there is more of a trend. Moreover, the trend is what the majority of people would predict.

However, in the early 2000s there was a sudden and dramatic decrease in fuel burn. Some light jets had an hourly fuel burn rate in the 140 Gallons per Hour region.

The result is that today’s light jets burn, on average, 140 to 200 gallons of fuel per hour. Sure, its a decrease of just 20 gallons per hour. However, thats equal to a $100 per hour reduction in cost.

In the world of private jets VLJs (Very Light Jets) are a new concept. VLJs are ideal for flights that last one or two hours.

The aircraft that really kicked off the VLJ aircraft category was the Eclipse 500. This was an aircraft that many were sceptical about, primarily due to its lack of toilet.

However, the Eclipse 500 was a success and introduced the world to the VLJ concept. One of the primary benefits of VLJs is that they provide virtually every benefit of flying private but at a very reasonable cost.

One of the ways that VLJs achieve this is through low fuel consumption.

Given that VLJs haven’t been around for very long, average hourly fuel burn figures remain the similar today compared with 2006.

The aircraft with lowest hourly fuel burn figure is the Cirrus Vision Jet, mainly thanks to its small footprint and single engine.

Contrary to popular belief, hourly fuel burn figures and fuel efficiency of private jets has remained relatively consistent for the past 50 years.

Of course, there has been a slight decrease over time. However, this decrease is to the tune of a few percent.

This can be interpreted two ways.

Firstly, one could argue that there hasn’t been enough development, innovation and incentives to reduce hourly fuel burn figures.

Alternatively one could argue that private jets have always remained as fuel efficient as possible. Much like how jets from 40 years can cruise at 51,000 feet (see Cessna Citation III).

Improvements of aircraft have come in other areas. And, while hourly fuel burn figures have decreased marginally, manufacturers do have a strong incentive to reduce fuel burn.

The lower the fuel burn the lower the operational costs. Therefore, an increased edge over the competition. However, fuel burn has to be balanced with the other figures and demands that customers have for the aircraft. For example, a high cruise speed and large cabin.

Private jets have got more fuel efficient over the years when considering the other advancements and capabilities of these aicraft.