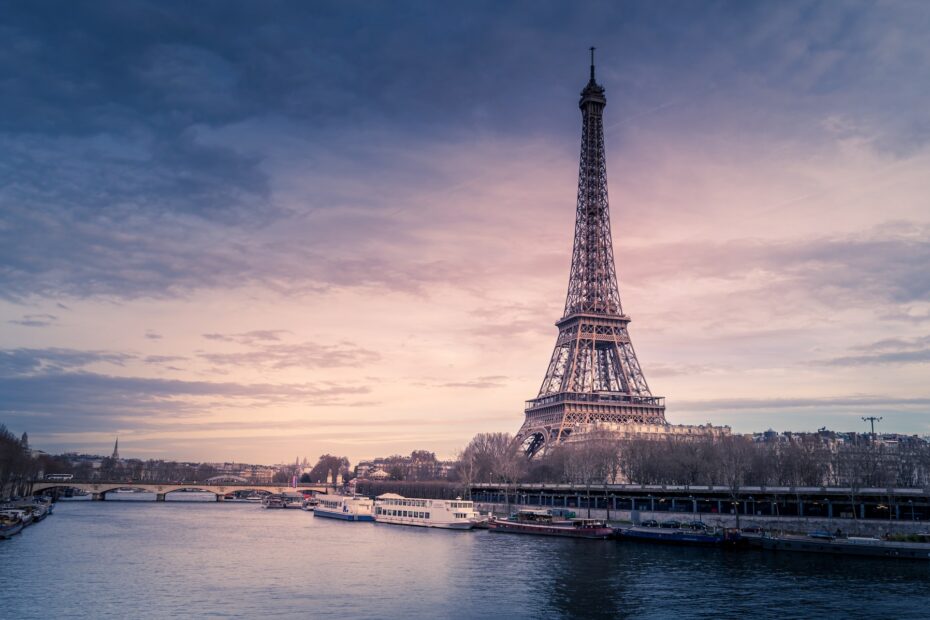 Flight time for a private jet between London and Paris is just under one hour, with a flight distance of 236 miles. Due to this London to Paris route being so short, the time savings over commercial air travel are significant. Rather than having to show up hours before departure, private jet customers need only show up 15 minutes before departure.

Furthermore, there is a greater selection of airports available that are closer to the city centre. Consequently you will be savings hours when flying by private jet from London to Paris compared with commercial aviation.

The route between London and Paris is delightfully simple. The total flight distance comes in at just 236 miles or 380 KM. A similar distance to flying from Los Angeles to Las Vegas or New York to Washnington, D.C..

When flying by private jet this makes the flight time under one hour. Therefore, virtually any aircraft can fly this route. From turboprops to large jets. As a result customers will have a wide choice of aircraft to fly this route.

Suitable Aircraft for Flying by Private Jet from London to Paris

Seeing as the flight distance between London and Paris is under 250 miles, virtually every aircraft can be considered for this mission.

However, by far the most popular aircraft for this route is the Cessna Citation Mustang. A great VLJ that is fast, efficient and comfortable. Of course, you may wish to research all aircraft types by yourself. Alternatively, read our comprehensive guide about private jet types.

One of the most popular ways to fly the 236 miles by private jet from London to Paris is in a VLJ.

VLJ stands for Very Light Jets. These are aircraft that are perfect for up to four passengers with minimal luggage flying short journeys.

One of the most popular VLJs for the London to Paris route is the Cessna Citation Mustang. The Mustang can comfortably complete the journey is approximately one hour. The aircraft is small, comfortable and cost effective.

The best way to find a Cessna Citation Mustang to transport you by private jet from London to Paris is with GlobeAir. GlobeAir have a large fleet of Mustangs and can provide you with an instant fixed price for the route.

More modern VLJs for this route are the Embraer Phenom 100EV, Cessna Citation M2 and HondaJet. See which is the best VLJ here.

Of course, if there are more than four people a larger jet will be required. The next step up from a VLJ is a Light Jet, followed by a midsize and then large jet.

Important to note is that the larger the aircraft, the large the cost. Everything from fuel to aircraft hire cost, from landing fees to crew costs, will all increase. Additionally, it is likely that a short leg surcharge will be more significant.

Popular light jets for the London to Paris route include the Embraer Phenom 300E and Nextant 400XTi. These aircraft are often available in the region and have great performance for such a short route.

However, if your group is too large for a light jet then bigger aircraft will be required. Find out the right match for you with our comprehensive aircraft guide here.

London has eight airports that are suitable for private jets for the route from London to Paris. These airports are distributed all over London and the surrounding areas.

As a result, it is highly likely that you will be able to find a convenient airport to reduce your overall travel time.

There airports that are available in London when flying by private jet from London to Paris are as follows:

You can learn more about each individual London airport here.

When choosing an airport to fly from there are three main factors to consider:

Paris has 3 airports that you will want to consider when flying into the city. These airports are:

However, as previously mentioned, there are a series of factors that you will want to consider when choosing your Paris airport.

It is advised to not fly by private jet to Paris Charles De Gaulle Airport. This is due to the high volume of commercial traffic and its distance from the city. Therefore, you will not only be more likely to be delayed when flying in or out of Charles De Gaulle, but you will also spend more time on the ground getting into the city.

Consequently, the airports that should be on the top of your list will be Le Bourget and Orly. Typically Le Bourget is more popular with private jet travelers as it has a greater selection of facilities.

When flying by private jet the prices can vary depending on a wide variety of factors. However, it is possible to give some estimates for flights by private jet from London to Paris. Prices are for a one way flight only. All prices are in GBP and are estimates only.

Please keep in mind that these prices are estimates only and that private jet prices depend on a variety of factors. Additionally, every aircraft type has different hourly costs.

If you wish to get a firm price for a Cessna Citation Mustang for flying by private jet form London to Paris – or anywhere in Europe really – consider GlobeAir. They will be able to give you an instant price with just a few details. The whole process can also be done entirely online. For other aircraft we recommend Villiers Jets.