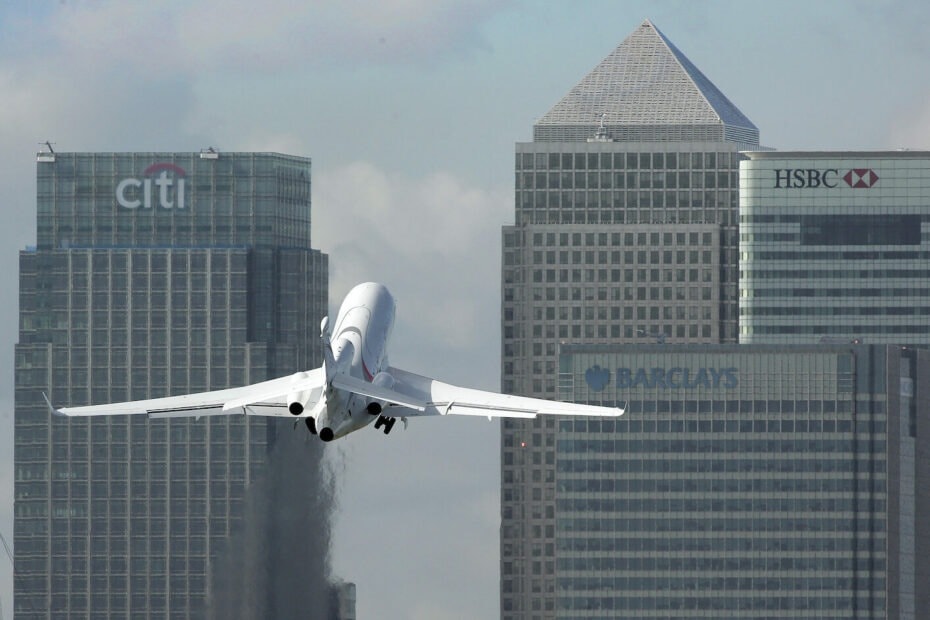 London has a large number of private jet airports. These range from smaller airports that are used for general aviation, such as Blackbushe airport, all the way up to larger commercial airports such as London Luton and London City. Additionally, RAF Northolt is included as a private jet airport out of London.

When choosing which airport is right for you, consider the following factors. Firstly, the location. The primary purpose of private jet travel is to reduce your overall travel time. Therefore, choose the airport that is most convenient to your starting point.

Secondly, landing fees. All airports have different landing fees (learn more about factors affecting private jet charter cost here). Therefore, switching airports is a good way to reduce the cost of some charters. Depending on the airport these can range from a few hundred pounds to many thousands.

For example, the landing fees for a Embraer Phenom 300 at London City Airport is just over £2,000.

Thirdly, Fixed Base Operators (FBO) facilities. These are essentially the private jet terminals. All airports have different numbers of FBOs, different facilities and are run by different companies. Therefore, if there are particular services that you need at the FBO, let your charter broker know. They will be able to advise on the best option.

Please note that London Heathrow is not available for private jet charters. Due to the high volume of air traffic, not only would it be near impossible to arrange a slot but the fees would be so exorbitant that it would make little sense.

While Heathrow does have a “Terminal Six” for VIPs – it is mostly the Royal Family that use this terminal. If you wish to depart and arrive in West London, RAF Northolt is a far better option.

London RAF Northolt is in Ruislip, Middlesex, which is just to the West of London. The airport is suitable for private jets. However, the airport is still used by the RAF, therefore limiting the number of civilian slots available.

As you would expect, security at RAF Northolt is extremely strict. Therefore, VIPs and government flights are very popular here.

Please note that flights with pets onboard are not welcome at RAF Northolt. Additionally, no single engine aircraft are permitted to use Northolt. This, therefore, rules out the Cirrus Vision Jet.

London City Airport is the best choice if you need to get into central London. It is, as the name suggests, based in London itself. Located towards the East of London just near Canary Wharf.

The result of this is stunning views of the city on approach and take off.

Important to note is that pilots must be specifically trained to land at London City Airport. This is due to the approach angle. It is at 5.8 degrees rather than the usual 3 degrees.

Furthermore, aircraft also need to be approved. This isn’t an issue for smaller aircraft, but large jets need approval – for example, see the Dassault Falcon 8X.

Biggin Hill is a popular choice for private jet charters due to its proximity to the city. The airport is situated just 12 miles from London’s financial centre.

Furthermore, the airport is a dedicated business aviation airport. The average car journey takes 50 minutes to get to the centre or just 6 minutes by helicopter.

The airport is open to both private jets and commercial air traffic. The motorway links result in an approximately one hour drive into the centre of London.

The airport has good facilities for private jet customers, operators and crew.

This, therefore, makes it a highly desirable choice for private jet customers.

London Blackbushe Airport is approximately a 40 minute drive from the center of London, located right near Farnborough airport. Alternatively, travel by helicopter to the centre of London takes just 15 minutes.

The airport is very popular with small jets arriving and departing across Europe. However, note that the airport is considerably smaller than others on this list. Therefore, a smaller aircraft will be required.

London Oxford Airport, despite having London in the name, isn’t strictly in London. Rather it is located in Kidlington, Oxfordshire. The airport is a 20 minute drive from Oxford and around 1 hour 30 minutes to central London.