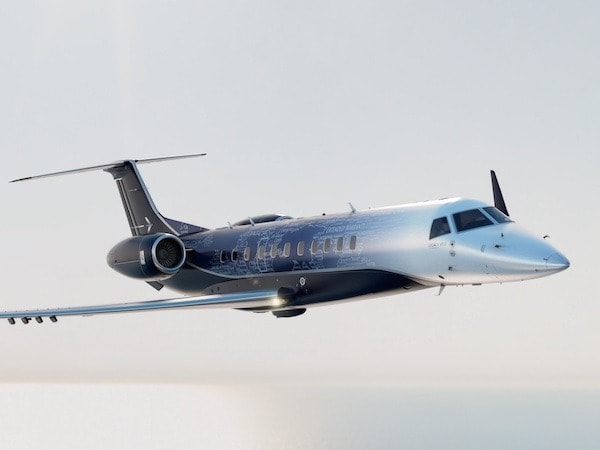 The Embraer Legacy 650E ended production in 2020, along with the Legacy 450 and Legacy 500 aircraft. In their place Embraer released the “disruptive” Praetor 500 and Praetor 600.

Therefore, one is left questioning how does the new generation of Embraer aircraft compare with the old generation? Where are the differences? Which aircraft is a better purchase?

An area where Embraer have improved upon the Legacy 650E with the Praetor 600 is performance. This is true in terms of power, speed and efficiency.

The Embraer Legacy 650E is powered by two Rolls-Royce AE 3007A2 engines. Each engine is capable of producing up to 9,020 lbf of thrust, resulting in a total thrust output of 18,040 lbf.

In comparison, the Embraer Praetor 600 is powered by two Honeywell HTF7500E engines. Each engine can produce up to 7,528 lbf of thrust. This, therefore, results in a total thrust output of 15,056 lbf.

As a result, the Embraer Legacy 650E is capable of cruising at a maximum of 440 knots. Whereas the Embraer Praetor 600 has a maximum cruise speed of 466 knots.

The maximum cruise speed isn’t the only difference when it comes to the performance of these aircraft.

And, not only can the Praetor 600 fly faster and higher than the Legacy, it’s also more efficiency. The Embraer Legacy 650E has an average fuel burn of 300 Gallons per Hour (GPH).

In comparison, the Embraer Praetor 600 has an average fuel burn of 254 Gallons per Hour (GPH).

Therefore, not only will the Praetor 600 get you to your destination quicker than the Legacy, it will also use less fuel.

Range is another area where the Praetor 600 improves on the previous generation Legacy 650E.

While an extra 118 nautical miles of range is nothing ground breaking, it is still a positive to have an increased range.

Both aircraft will be able to easily cross the Atlantic, flying from New York to London and beyond.

The improvements over the previous generation just keep on coming.

The Praetor 600 is able to take off and land in a much shorter distance than the Legacy 650E.

A difference of 1,000 feet is significant. It is reasonable to expect the Praetor 600 to be able to operate at more airports than the Legacy 650E.

Minimum landing distance provides the same story. The Legacy 650E requires at least 2,346 feet in order to land. However, the Praetor 600 requires a minimum distance of 2,165 feet.

So, just to quickly recap, the Praetor 600 can cruise higher, cruise faster, uses less fuel, can fly farther and requires less runway. Moreover, the Praetor 600 is able to achieve all this while having less thrust than the Legacy 650E.

Up until this point the Praetor 600 has shown improvements over the Legacy 650E is every measurable aspect.

However, interior dimensions is an area where the older Legacy 650E wins out.

Both aircraft measure 1.83 meters in height.

This additional space of the Legacy 650E results in it being able to carry more passengers and baggage.

On the inside of these aircraft then trend continues. Embraer have made improvements to the Praetor 600 compared with the previous generation 650E.

For example, the cabin altitude within the Praetor 600 is lower than the Legacy 650E, albeit it only slighty.

The maximum cabin altitude of the Praetor 600 is just 5,800 feet compared to the 6,000 feet of the Legacy 650E. The benefits of a lower cabin altitude include a more pleasant cabin environment and reduced effects of jet lag.

As you would expect with any private jet, there are a multitude of interior configurations that span the three-cabin zone interior. Options include a conference table area, two divans, and forward crew lavatory.

With options for sofas and sliding chairs, depending on the chosen configuration, there is space for up to six beds. The kitchen in the nose of the aircraft provides more than enough space for the necessary utensils, storage and serving of dishes.

The spacious toilet room is located in the tail section, from which access to the luggage compartment is open during the flight. With individual displays, you can equip all the chairs, in addition, the image can be displayed on the central widescreen screens – their number and size are optional.

Thoughtful design decisions have maximized the feeling of space within the cabin. For example, the cabin’s stowable tables can be stowed away and completely hidden. When erected the tables open flush with the side ledge. This provides ample space for you and 11 other passengers (12 passenger capacity total).

The seats throughout the cabin can recline and swivel as you wish to get you sitting in the perfect position. Furthermore, the plush seats can be effortlessly turned into comfortable, fully flat beds.

At the front of the passenger cabin, Embraer has integrated a luxurious stone-floored, highly functional galley. This has been designed to provide you all your desires as you are crossing oceans on a long flight. From warm coffee to a refreshing drink to a nourishing meal. Embraer has equipped the galley with a microwave, conventional oven, refrigerator, coffee brewer, and beautiful crystal, china, and silverware.

Being one of the most modern business aircraft in the sky, Embraer has left no stone unturned in regards to onboard technology. Home-like WiFi. Touchscreen cabin controls. Immersive audio and video streaming. Touchscreens are integrated into the overhead panels putting all cabin controls and information at your fingertips.

As you would expect, the hourly charter price of the newer aircraft is more than that of the previous generation. However, keep in mind that there are a number of factors that influence the price of a private jet charter.

The estimated hourly charter price of the Embraer Legacy 650E is $5,900.

In comparison, the estimated hourly charter price of the Embraer Praetor 600 is $8,000.

However, the opposite is true when it comes to purchase price. It is remarkable how Embraer are able to sell the Praetor 600 at such incredible value.

Looking at the pre-owned market, the Praetor 600 holds its value extremely well. It is estimated that a 2019 model has a value of $18 million.

In comparison, a 2019 example of the Legacy 650E is estimated to cost $20 million. Therefore, after just two years of ownership the 650E decreases by nearly 25%.

Conversely, the Praetor 600 decreases by around 15% after the same length of ownership.

Having read through this comparison it doesn’t seem fair to say which is the better aircraft.

The Legacy enabled the Praetor 600 to exist. It is expected that Embraer would improve upon the previous generation in order to create the best possible aircraft.

What’s most impressive is the fact that Embraer have built a better aircraft, and yet they are able to sell it for $5 million less.

The Praetor 600 present incredible value for money, as does the Praetor 500.