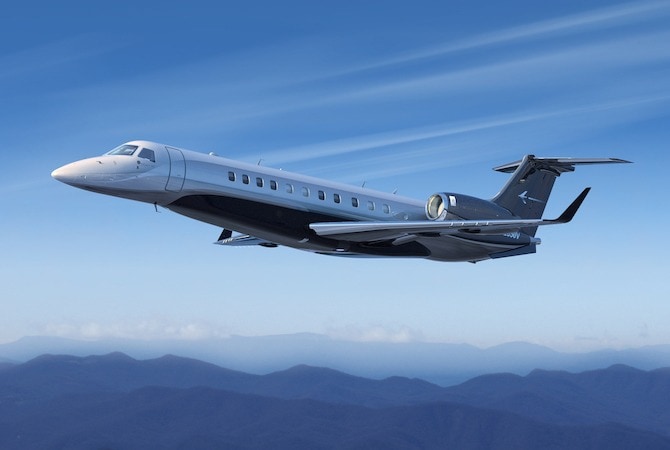 The Embraer Legacy 650E and Bombardier Challenger 650 are two interesting aircraft to compare.

Among their many similarities – such as range and ground performance – these aircraft are more different that you first may expect.

Therefore, which is better? Which one should you choose?

In comparison, the Challenger 650 is powered by two General Electric CF34-3B engines, with each producing 9,220 lbs of thrust. This, therefore, results in a total thrust output of 18,440 lbs.

It is worth noting at this point that the Legacy 650E is a larger aircraft than the Challenger 650.

Therefore, over the course of 1,000 nautical miles the Challenger 650 will be able to save you 13 minutes compared with the Legacy 650E.

As a result, over the course of a mission with a 3,000 nautical mile cruise, the Challenger 650 would get you on the ground 39 minutes before the Legacy 650E. That’s a substantial amount of time to save.

Both aircraft have a maximum cruising altitude of 41,000 feet. Additionally, the fuel burn of both aircraft is very similar.

The range of both aircraft is nearly identical.

The Legacy 650E falls only 100 nautical miles short of the Challenger 650.

With a maximum range of 4,000 nautical miles, the Challenger 650 is able to fly non-stop from New York to Rome, Los Angeles to Caracas and Miami to Madrid.

Naturally, the legacy 650E with its range of 3,900 nautical miles is capable of flying the same routes.

However, please note that these range figures are in optimal conditions, such as perfect weather and minimal weight. Therefore, once passengers and a headwind are factored in, both aircraft will have shorter ranges.

Given that the Legacy 650E is down on total thrust output, the Challenger 650 is able to take off in a shorter distance. However, only just.

When it comes to minimum landing distance the Legacy is just able to beat the Challenger.

However, these figures are so similar that it will go unnoticed. There will not be an airport that the Challenger can operate from that the Legacy can’t.

Both aircraft are capable of accessing the same airports.

One of the most notable differences between the Legacy 650E and Challenger 650 is the interior length. The Legacy has a far longer cabin, measuring 15.19 meters to the Challenger’s 7.8 meter length.

However, the Challenger 650 has a wider cabin measuring 2.41 meters compared with the 2.11 meters wide of the Legacy 650E.

And finally, both aircraft have the same cabin height of 1.83 meters.

However, in order to achieve these figures passengers will have to be using the belted lavatories and divan. Therefore, it is unlikely that these aircraft will ever fly with every ‘seat’ occupied.

When it comes to assessing which cabin is better it ultimately comes down to your mission. When carrying more passengers the Legacy 650E will be the better choice thanks to the longer cabin.

However, with just a few passengers the extra width of the Challenger 650 will result in wider seats, a wider aisle and more shoulder room.

The layouts of these aircraft is relatively similar. Both aircraft feature a club suite at the front of the aircraft and club seats at the rear with an adjacent divan. However, the Legacy 650E also features an additional club suite in the middle of the aircraft.

One area where these aircraft do differ, however, is cabin altitude. A lower cabin altitude will result in a more pleasant cabin environment and reduce the effects of jet lag.

As you would expect with any private jet, there are a multitude of interior configurations that span the three-cabin zone interior. Options include a conference table area, two divans, and forward crew lavatory.

With options for sofas and sliding chairs, depending on the chosen configuration, there is space for up to six beds. The kitchen in the nose of the aircraft provides more than enough space for the necessary utensils, storage and serving of dishes.

The spacious toilet room is located in the tail section, from which access to the luggage compartment is open during the flight. With individual displays, you can equip all the chairs, in addition, the image can be displayed on the central widescreen screens – their number and size are optional.

All seats are fully reclining and swivel round for maximum comfort. Every component in the aircraft has been hand-built by Bombardier at their factory in Montreal, providing you with an aircraft that is unique in the sky.

The environment within the cabin can be controlled with the mobile app which connects via Bluetooth, controlling the entertainment system and the cabin environment. In the usual configuration, passengers can expect to find four facing leather club seats in the forward section of the jet, with an additional four facing seats towards the aft of the aircraft. Along with these four seats, guests can find a four-seat divan (with specially made cushions). If you are flying through the night (or just need a nap), the forward seats and the divan can be converted into beds.

The Bombardier Challenger 650 can carry up to twelve passengers, two pilots, and one flight attendant who can cater for you using the larger appliances in the galley – allowing for faster preparation of food. The galley is hidden behind an electronically controlled door.

When it comes to chartering these aircraft the Legacy 650E is less expensive. However, please note that there are many factors that influence the price of a private jet charter. Therefore, prices will vary depending on the mission.

In comparison, the estimated hourly price of the Challenger 650 is $6,600.

This pricing trend continues through to the new list price. However, note that production of the Embraer Legacy 650E ended in 2020. Therefore, the price stated is the Legacy 650E list price in its final year of production.

The Embraer Legacy 650E has a new list price of $26 million – equivalent to the Challenger 350.

When it comes to the Aircraft Bluebook value of these aircraft, the Legacy 650E retains its value far better.

Therefore, over the course of three years, the Legacy 650E has lost around 30% of its value.

However, over the same three years the Bombardier Challenger 650 has lost around 40% of its original value.

The primary benefit of the Challenger 650 is its higher cruise speed.

However, given that the Legacy 650E has a larger cabin, lower upfront cost and less depreciation, it represents better value than the Challenger 650.

Moreover, the Legacy 650E has a lower cabin altitude than the Challenger.

However, before rushing ahead and getting a Legacy 650E, consider its replacement. The Praetor 600 really demonstrates Embraer’s ability to manufacturer incredible aircraft.

See a comparison between the Embraer Legacy 650E and Embraer Praetor 600 here.