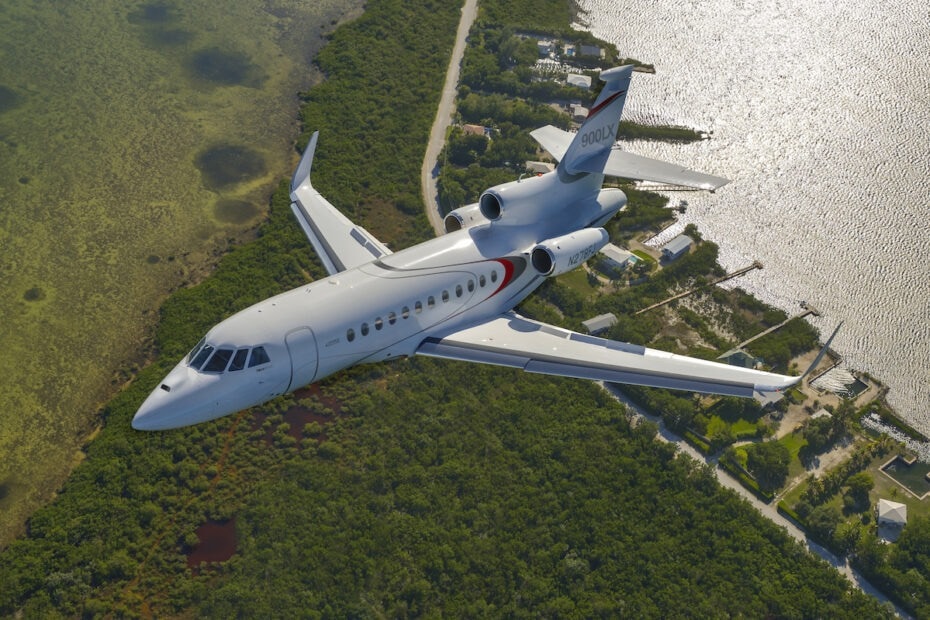 A common question is how the Falcon 900LX and Falcon 7X compare. Is there much of a difference between these aircraft? If so, how do they differ? Which is one is better?

All these questions and more will be answered in this comparison article.

Starting with performance, the Falcon 900LX is powered by three Honeywell TFE731-60 engines. Each engine is capable of producing up to 5,000 lbs of thrust. This, therefore, results in a total thrust output of up to 15,000 lbs.

On the other hand, the Falcon 7X is powered by three Pratt & Whitney Canada PW307A engine. Each engine produces up to 6,400 lbs of thrust, resulting in a total thrust output of 19,200 lbs.

While both aircraft have a maximum cruise altitude of 51,000 feet, they have very different cruise speeds.

Therefore, all things being equal, over the course of 1,000 nautical miles the 7X will save you almost 8 minutes compared with the 900LX.

Of course, most of the time this aircraft will be flying further than 1,000 nautical miles in a single leg. Therefore, when flying two, three or four thousand nautical miles, the 7X will start to save passengers a significant amount of time.

The maximum range of the Falcon 7X is considerably more than that of the 900LX.

Use this range tool to visualize these distances.

The ground performance of these aircraft is remarkably similar. However, as is usually the case, the larger aircraft with a greater range ability requires more runway.

The minimum take off distance of the Falcon 900LX comes in at 5,360 feet. In comparison the Falcon 7X requires at least 5,710 feet to get safely in the air.

However, the story is reversed when evaluating landing distance.

The cabin width and height of the 900LX and 7X are identical. However, the Falcon 7X does have a slightly longer cabin than the 900LX.

Both aircraft measure 2.34 meters in width and 1.88 meters in height.

This extra length translates to the Falcon 7X being able to carry more passengers than the 900LX.

According to Dassault, the maximum number of passengers that the 900LX can carry is 14. Whereas the Falcon 7X can accommodate up to 16 passengers.

Of course, it is highly unlikely that customers will customize their aircraft to carry this many people. Moreover, it is unlikely that these aircraft will be flying with every seat occupied.

Much like comparing the Gulfstream G500 with the G600, the Cessna CJ3+ with the CJ4 or even the Dassault Falcon 6X, 7X and 8X, manufacturers have a certain style of interior.

This style of interior is carried throughout the aircraft in the lineup.

The Falcon 900LX and Falcon 7X are no exception.

The interiors of both aircraft are extremely similar. However, an area where these aircraft to differ significantly is cabin altitude.

A lower cabin altitude results in a more pleasant cabin experience and reduces the effects of jet lag.

The Falcon 7X has a maximum cabin altitude of 6,000 feet. While this isn’t the best in the industry (see Gulfstream G650ER), it is a highly respectable number.

Additionally, passengers can select from a wide range of entertainment and connectivity tools. Voice and broadband data services provided by SATCOM can also be optioned on the 900LX.

The quality in the cabin is second to none inside the 900LX. An elegant mix of materials has led to a tastefully designed interior. Through an efficient use of space the designers have also been able to craft a spacious feeling cabin. Controls from the cabin management system are neatly hidden in the armrest.

This places control within easy reach but is not obtrusive. Closely spaced windows allow for an abundance of natural light within the cabin.

Dassault have been able to keep the noise level within the cabin to just 54 decibels. This, combined its innovative “mood lighting”, makes the aircraft a relaxing place to spend a few hours.

Climate control onboard the 7X is capable of keeping the temperature to within one degree throughout the cabin. Air is humidified and refreshed.

The 7X features Dassault’s advanced cabin management system. This system provides you with entertainment and connectivity tools in a user-friendly way. FalconCabin HD+ allows you to control the cabin from your own mobile device.

Customization of the 7X can be extensive. For example, you can optionally equip a second lavatory or an onboard shower to keep you refreshed. Depending on your requirements, the 7X can carry 12 to 16 passengers.

When flying at 45,000 feet the cabin altitude is just 4,800 feet, rising to 6,000 feet when cruising at 51,000 feet. Cruising at 41,000 feet results in a cabin altitude of 3,950 feet! The cabin noise level comes in at a low 52 decibels. Therefore, customers are treated to a quiet, relaxing environment. These elements ensure that you will arrive at your destination with minimal jet lag.

When it comes to chartering these aircraft, the Falcon 900LX is less expensive than the 7X.

In comparison, the Falcon 7X has an estimated hourly charter price of $6,850.

Of course, please keep in mind that there are many factors that influence the charter price of a private jet.

When it comes to purchasing these aircraft, the 900LX is once again less expensive than the 7X.

However, the purchase price of these aircraft starts to get really interesting when looking at their pre-owned value.

According to Aircraft Bluebook, a five year old Falcon 900LX will set you back $25 million.

Whereas, a Falcon 7X of the same age will cost you $32 million.

Therefore, in terms of percentage value lost, the Falcon 7X loses around 40% of its value over five years while the Falcon 900LX loses almost 45% over the same timespan.

Despite being a slightly older model, the Falcon 7X easily beats the Falcon 900LX, except for when it comes to money.

The Falcon 7X is faster, can fly further and more luxurious inside.