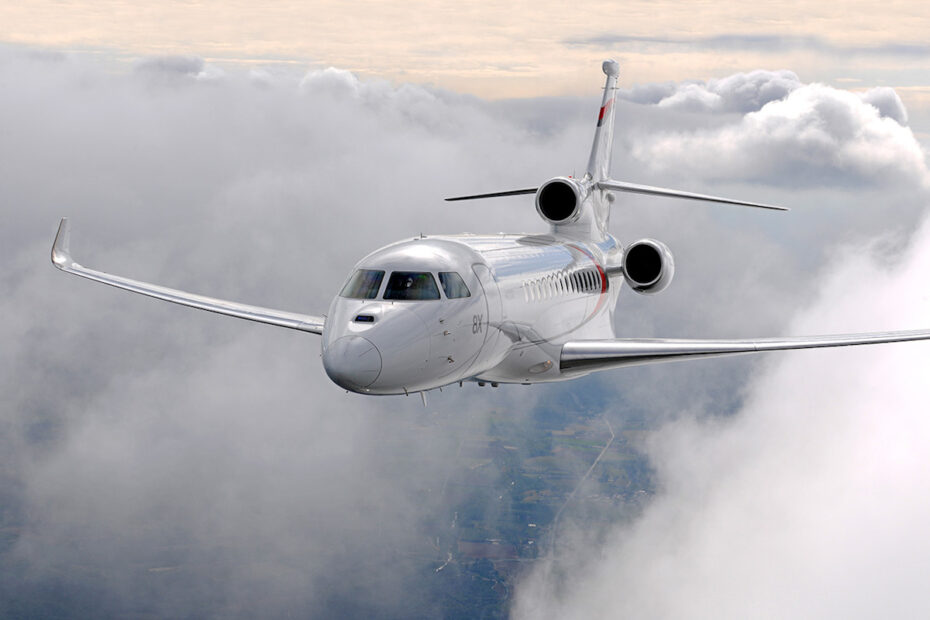 However, despite their many similarities – such as range and ground performance – these aircraft are more different that you first may expect.

The Dassault Falcon 8X is powered by three Pratt & Whitney Canada PW307D engines. Each engine is capable of producing up to 6,722 lbs of thrust. As a result, the total thrust output for the Falcon 8X is 20,166.

On the other hand, the Dassault Falcon 900LX is powered by three Honeywell TFE731-60 engines. Each engine is capable of producing up to 5,000 lbs of thrust. As a result, the total thrust output for the Falcon 900LX is 15,000.

While both aircraft have a maximum cruise altitude of 51,000 feet, they have very different cruise speeds.

Fuel burn is relatively similar between these aircraft, with the Falcon 8X having a slightly higher fuel consumption than the Falcon 900LX

The Falcon 900LX falls 1,700 nautical miles short of the Falcon 8X when it comes to range.

Critically, the more weight that an aircraft is carrying the greater the decrease in range. Therefore, the Falcon 8X will be able to handle more weight – be it passengers or cargo – more effectively than the 900LX.

The Falcon 8X will be able to fly the same distance as the 900LX but with a higher payload. This is an important factor to consider if you are planning on travelling with lots of luggage or lots of passengers.

Next up is ground performance.

And, crucially, reduces overall travel time as you are able to land closer to your final destination.

Will these differences be noticeable in the real world? Most likely not.

However, the 600 feet difference in take off distance for the 900LX is not an insignificant amount. Therefore, there may be a handful of situations in which a 900LX can operate out of a certain airport that the 8X can’t.

When it comes to interior space, the Falcon 8X achieves a clear victory over the Falcon 900LX.

Additionally, the similarities continue with both aircraft having the same interior height, measuring 1.88 meters tall.

As you would expect from the larger cabin size of the 8X, it can also carry more passengers. The Falcon 8X is capable of carrying up to 16. Whereas the Falcon 900LX has an official maximum passenger occupancy of 14.

And finally, baggage capacity. The Falcon 8X can accommodate 140 cubic feet of luggage. Meanwhile, the Falcon 900LX is limited to just 127 cubic feet of baggage.

When comparing the interiors of these two aircraft, the Falcon 8X really stands out as being the more modern aircraft.

Being the longest cabin of any Dassault Falcon in the sky (13 metres long to be precise), every center metre of the cabin is used efficiently and is claimed by Dassault to be the industry’s most flexible cabin.

With a maximum cabin altitude of just 6,000 feet and being able to maintain a cabin altitude of 3,900 feet when cruising at 41,000 feet, this is much lower than you will find on any airliner and most other business jets.

This, combined with the exceptionally quiet cabin noise level of just 49 dB, will ensure that you can work, relax or sleep in the most comfortable environment possible and that you arrive at your destination as fresh as possible.

The options for layout in this cabin go above and beyond any other business jet on the market. With three extra feet than the 7X to play with, you will be surprised with how much extra space is available.

Why not option for the three-lounge cabin with a shower in the rear and a crew rest are in the front? Or maybe you want a shorter entranceway so that you have more lounge space. Perhaps a large entranceway in order to accommodate a spacious, lie-flat crew quarters and a larger galley in order to enjoy gourmet meals while you are in the sky.

In Dassault’s own words, the Falcon 900LX is “elegant in design and smart in function”.

These centers enable customers to make informed and confident choices about the interior design of the aircraft. Customers are able to envision their interiors and examine features in actual aircraft and mockups. Customers can then proceed to select from a range of fabrics, leathers, carpets, veneers, electronics, equipment and accessories.

Additionally, passengers can select from a wide range of entertainment and connectivity tools. Voice and broadband data services provided by SATCOM can also be optioned on the 900LX.

The quality in the cabin is second to none inside the 900LX. An elegant mix of materials has led to a tastefully designed interior. Through an efficient use of space the designers have also been able to craft a spacious feeling cabin. Controls from the cabin management system are neatly hidden in the armrest. This places control within easy reach but is not obtrusive. Closely spaced windows allow for an abundance of natural light within the cabin.

Dassault have been able to keep the noise level within the cabin to just 54 decibels. This, combined its innovative “mood lighting”, makes the aircraft a relaxing place to spend a few hours.

When it comes to chartering these aircraft the Falcon 900LX is less expensive. However, please note that there are many factors that influence the price of a private jet charter. Therefore, prices will vary depending on the mission.

On the other hand, the estimated hourly charter price of the Falcon 900LXis $5,900.

When it comes to purchasing these aircraft, the Falcon 900LX is less expensive than the Falcon 8X.

According to Aircraft Bluebook, a 5 year old Falcon 8X is estimated to set you back $40 million.

In comparison, a 5 year old Falcon 900LX is estimated to cost $25 million.

Therefore, the Falcon 900LX will see a 57% retention of value over the a five year period.

In comparison, the Falcon 8X will see a 69% retention of value over the same time period.

So, which is better? Which one should you choose? The Falcon 8X or the Falcon 900LX.

Well, like with many aircraft family comparisons, these aircraft have been perfectly placed to work together.

If you need additional range, passenger capacity or space, then the Falcon 8X is the better option.

However, it is hard to think of a scenario where the 900LX can complete a mission and, instead, a customer were to opt for the Falcon 8X.