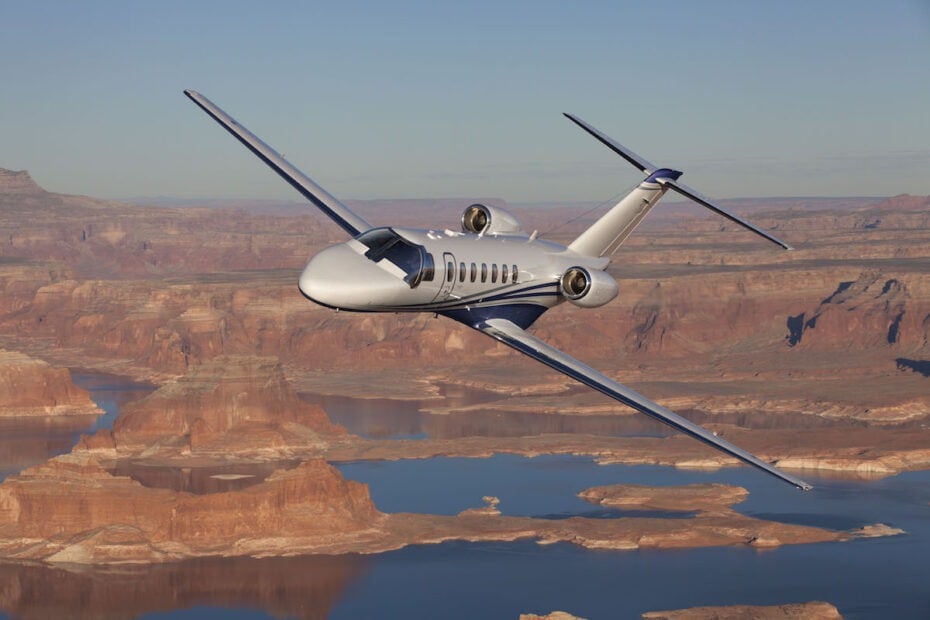 The history of this lineup of aircraft dates back to the early 1990s. However, the CJ3+ and CJ4 represent the latest members of the family.

If you are interested in comparisons between other Cessna aircraft, then look at this comparison between the Cessna Latitude and Longitude.

The Cessna Citation CJ3+ is powered by two Williams Intl. FJ44-3A engines. Each engine is capable of outputting up to 2,820 lbs of thrust, resulting in a total out of 5,640 lbs of thrust.

In comparison, the Cessna Citation CJ4 is powered by two Williams International FJ44-4A engines. Each engine is capable of putting out up to 3,621 lbs of thrust (7,242 lb total).

However, the CJ3+ and CJ4 have very different maximum cruise speeds.

Therefore, over the course of 1,000 nautical miles the Cessna Citation CJ4 will save you 11 minutes over the CJ3+. Of course, this is assuming that both aircraft are flying at their maximum cruise speed and all conditions are equal.

However, over the course of several trips, choosing the CJ4 over the CJ3+ will start to save you hours of time.

Surprisingly the difference in range between these two aircraft is relatively minor.

Use this interactive range map to see how far these range figures will get you.

Therefore, even of the CJ4s best day, the aircraft couldn’t quite fly non-stop from New York to Los Angeles.

Therefore, the CJ3+ can take off in a minimum distance of 3,180 feet. Whereas the CJ4 requires at least 3,410 feet of runway to take off safely.

The same story continues when it comes to landing. The CJ3+ requires a minimum of 2,720 feet to land. In comparison, the CJ4 has a minimum landing distance of 2,940 feet.

In the real world a difference in take off distance of 230 feet will go unnoticed. Furthermore, be sure to keep in mind that these figures are the minimum distance required.

The interior dimensions of each aircraft simply highlight the fact that these aircraft are both based on the same airframe. Of course, that is no bad thing.

One reason for this is because these figures take into account one passenger sitting in the cockpit. Seeing as both aircraft are single pilot approved, one passenger is technically allowed to sit upfront.

However, any reputable charter operator will insist on having two pilots at all times.

Below is the interior layout for the CJ4. This is allowing for the maximum number of passengers. There are six clear seats. The other three seats come in the way of a side-facing couch and belted lavatory. The tenth passenger, as previously mentioned, would be sitting in the cockpit.

Realistically it is unlikely that more than six passengers will be onboard either of these aircraft at the same time.

Firstly, let’s look at the interior of the Citation CJ3+. Fourteen windows provide a reasonable amount of natural light within the cabin. When flying at night the interior is illuminated by low-power, energy-efficient LED lighting.

The CJ3+ remains connected to the world below with wireless cabin technology designed especially for the Citation lineup. Optional in-flight WiFi, moving maps, flight information, and cockpit audio are all integrated with your own personal device. This allows for “uninterrupted productivity and entertainment”. An optional Satcom phone is also available.

Upfront the aircraft features a refreshment center to keep you well fed during the mission. This can be replaced by a side-facing seat to maximize passenger capacity. The four front seats are arranged in a club configuration with access to an executive table.

All seats within the cabin swivel and track forward/aft and inboard/outboard, with the two center forward-facing seats also floor-tracking. In-between the double-club seats are two bi-fold tables, along with slimline bi-fold tables for the rear seating area. In order to increase the space within the club seat area, the rear-most seats can be moved further back.

The CJ4 features the Collins Venue cabin-management/entertainment system with a Blu-ray media center and single-channel SiriusXM radio. The CJ4 also features a monitor on the forward bulkhead, two side-ledge monitors, and environmental system controls. All lights in the cabin are LED and each seat has cabin-management and entertainment system controls. Gogo’s air-to-ground system or Cobham Inmarsat SwiftBroadband Satcom are available options for airborne connectivity.

The estimated hourly charter price of these aircraft is remarkably similar. Of course, there are many factors that can influence the price of a private jet charter. Therefore, please keep in mind that these figures are only estimates.

Therefore, the charter rate of these aircraft is nearly identical.

Given that it is smaller, the CJ3+ commands a lower price tag. The list price for a new Cessna Citation CJ3+ is $8 million.

On the other hand, the list price for a new Cessna Citation CJ4 is $9.7 million.

When it comes to the pre-owned market, the value of each aircraft is very nearly identical.

For example, a five-year-old CJ3+ is estimated to have a market value of $5.7 million. As a result, over five years the CJ3+ is expected to lose around 30% of its value. This level of depreciation is normal.

On the other hand, the CJ4 is slightly worse off when it comes to depreciation. A five-year-old CJ4 has an estimated market value of $6.5 million. This, therefore, represents a loss of over 30% of its original value.

To conclude, these aircraft are so similar it makes it hard to choose between them.

The main things that the CJ4 has going for it are the additional speed and length. However, not much more is done with the additional length in the CJ4. In the real world, the seating capacity is the same for both aircraft.

Additionally, the increased range of the CJ4 isn’t enough to conclude that it is the better aircraft over the CJ3+.

Therefore, it comes down to money. If chartering and you have a choice between the CJ3+ and CJ4, the CJ3+ is the one to go for. The experience will not be improved by upgrading to a CJ4.

This trend even continues through the purchase. The CJ3+ has a lower upfront cost and suffers less depreciation than the CJ4.

When comparing the CJ3+ and CJ4, it is hard to see a situation in which the CJ4 would be preferable over the CJ3+.