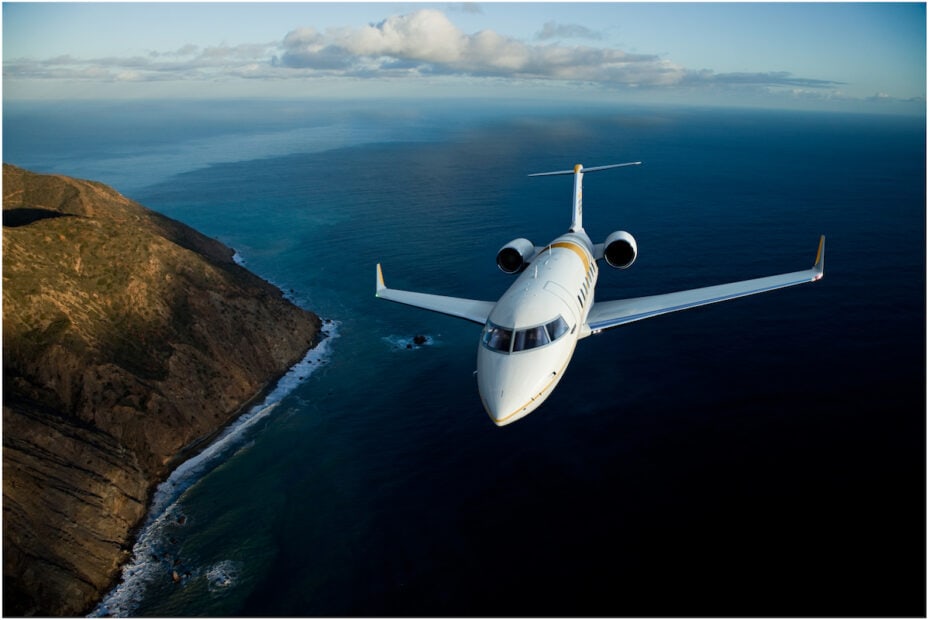 Much like when comparing the Challenger 650 with the Falcon 2000LXS, the Embraer Praetor 600 and Challenger 650 are two extremely evenly matched aircraft.

Moreover, the price of these aircraft put the Praetor 600 in a league of its own.

When it comes to outright performance, the Challenger 650 is off to a strong start.

The Bombardier Challenger 650 is powered by two General Electric CF34-3B engines. Each engine is capable of producing up to 8,729 lbs of thrust. As a result, the total thrust output for the Challenger 650 is 17,458 lbs.

On the other hand, the Embraer Praetor 600 is powered by two Honeywell HTF7500E engines. Each engine is capable of producing up to 7,528 lbs of thrust. As a result, the total thrust output for the Praetor 600 is 15,056 lbs.

This, therefore, allows the Challenger 650 to cruise at a higher speed than the Praetor.

A difference in cruise speed of 22 knots is not to be scoffed at. Over a 1,000 nautical mile cruise, the Challenger 650 will be around 6 minutes quicker than the Praetor 600.

This is a difference that your wallet will appreciate. In monetary terms, a gallon of Jet-A fuel is around $5. Therefore, every hour, the Praetor 600 will save you around $250 in fuel compared with the Challenger 650.

The maximum range of these aircraft is extremely similar. So similar in fact that you will notice no difference in the real world.

Visualize this range by using our simple tool.

Despite being down on power, the Praetor 600 is superior to the Challenger 650 when it comes to ground performance. Simply put, the Praetor 600 requires less runway to get in and out of the sky.

The benefit of the Praetor 600 requiring less runway to take off and land is that it increases the number of airports that it can operate from. This, in turn, saves you time and increases your flexibility. These benefits come form the Praetor 600 being able to land at airports that are closer to your final destination, reducing your overall travel time.

Finally, cabin height – an area where both aircraft are evenly matched.. The Challenger 650’s cabin measures 1.83 meters in height. For reference, the Praetor 600 measures 1.83 in interior height.

Another area where these two aircraft are equal is passenger capacity. Officially, both aircraft are capable of carrying up to 12 passengers.

And finally, baggage capacity. The Challenger 650 can accommodate 115 cubic feet of luggage. Meanwhile, the Praetor 600 has space for up to 155 cubic feet of baggage.

Consequently, each passenger flying on the Praetor 600 is able to carry more luggage than if they were flying on the Challenger 650.

When inside these aircraft it is easy to tell which one is newer.

A lower cabin altitude results in a more pleasant cabin environment and helps to reduce the effects of jet lag. Additionally, these cabin altitude figures are when each aircraft is cruising at their maximum altitude. For the Challenger 650 that is 41,000 feet. The Praetor 600, on the other hand, has a maximum cruise altitude of 45,000 feet.

As a result, the lower cabin altitude of the Praetor 600 is even more impressive.

With a total cabin volume of 1,146 cubic feet, the widest cabin in class, and Ka-band high-speed internet connectivity, the Challenger 650 jet is the perfect transportation method whether you are seeking a place to relax or a place to work. Every aircraft features hand stitching throughout the cabin, and if you spec it, beautiful metal insert on the wide leather seats. A feature within all Challenger 650s is the absence of visible speakers in the cabin walls to provide cleaner lines throughout the cabin.

All seats are filly reclining and swivel round for maximum comfort. Every component in the aircraft has been hand-built by Bombardier at their factory in Montreal, providing you with an aircraft that is unique in the sky.

The environment within the cabin can be controlled with the mobile app which connects via Bluetooth, controlling the entertainment system and the cabin environment. In the usual configuration, passengers can expect to find four facing leather club seats in the forward section of the jet, with an additional four facing seats towards the aft of the aircraft. Along with these four seats, guests can find a four-seat divan (with specially made cushions).

If you are flying through the night (or just need a nap), the forward seats and the divan can be converted into beds. Considering that the maximum cabin altitude in the Challenger 650 is 7,000 feet, you can be sure that you will arrive at your destination feeling refreshed.

The Bombardier Challenger 650 can carry up to twelve passengers, two pilots, and one flight attendant who can cater for you using the larger appliances in the galley – allowing for faster preparation of food. Behind an electronically controlled door passengers will find the galley.

Thoughtful attention to detail and superior craftsmanship can be found throughout the elegantly conceived 6-foot-tall flat-floor cabin. Interior materials are of the highest standard, while also being durable and lightweight. From bulkheads to tables you can make this aircraft your own.

Thoughtful design decisions have maximized the feeling of space within the cabin. For example, the cabin’s stowable tables can be stowed away and completely hidden. When erected the tables open flush with the side ledge. This provides ample space for you and 11 other passengers (12 passenger capacity total).

The seats throughout the cabin can recline and swivel as you wish to get you sitting in the perfect position. Furthermore, the plush seats can be effortlessly turned into comfortable, fully flat beds.

At the front of the passenger cabin, Embraer has integrated a luxurious stone-floored, highly functional galley. From warm coffee to a refreshing drink to a nourishing meal. Embraer has equipped the galley with a microwave, conventional oven, refrigerator, coffee brewer, and beautiful crystal, china, and silverware.

When cruising at 45,000 feet the cabin altitude is just 5,800 feet. The benefit of a low cabin altitude is that it will keep you feeling fresh and rested. Embraer has also developed the cabin to be ultra-quiet, making the aircraft a perfect environment for working, conversation, or relaxing.

Being one of the most modern business aircraft in the sky, Embraer has left no stone unturned in regards to onboard technology. Home-like WiFi. Touchscreen cabin controls. Immersive audio and video streaming. Integrated into the overhead panels, passengers will find touchscreens. These touchscreens put all cabin controls and information at your fingertips.

Embraer has developed an online configurator allowing you to spec out your own aircraft.

When it comes to chartering these aircraft the Bombardier Challenger 350 is less expensive than the Embraer Praetor 600. However, please note that there are many factors that influence the price of a private jet charter. Therefore, prices will vary depending on the mission.

In comparison, the estimated hourly charter price of the Praetor 600 is $8,000.

However, the purchase price of these aircraft starts to get really interesting when looking at their pre-owned value.

According to Aircraft Bluebook, a two year old Challenger 650 will set you back $21 million.

Therefore, the Challenger 650 will see a 66% retention of value over the same time period.

In comparison, a two year old Praetor 600 is estimated to cost $18 million.

This, therefore, results in the Praetor 600 will see a 86% retention of value over the same time period.

This is a spectacular retention of value on the Praetor 600’s part. Not only is the Praetor 600 less expensive to purchase but it will also retain its value far better than the Challenger.

So, which private jet is better? Which one should you choose?

While these aircraft are extremely similar, the Praetor 600 just comes out on top.

The Praetor 600 represents better value for money. And, especially given the lower list price and better retention of value, demonstrates a better value proposition.