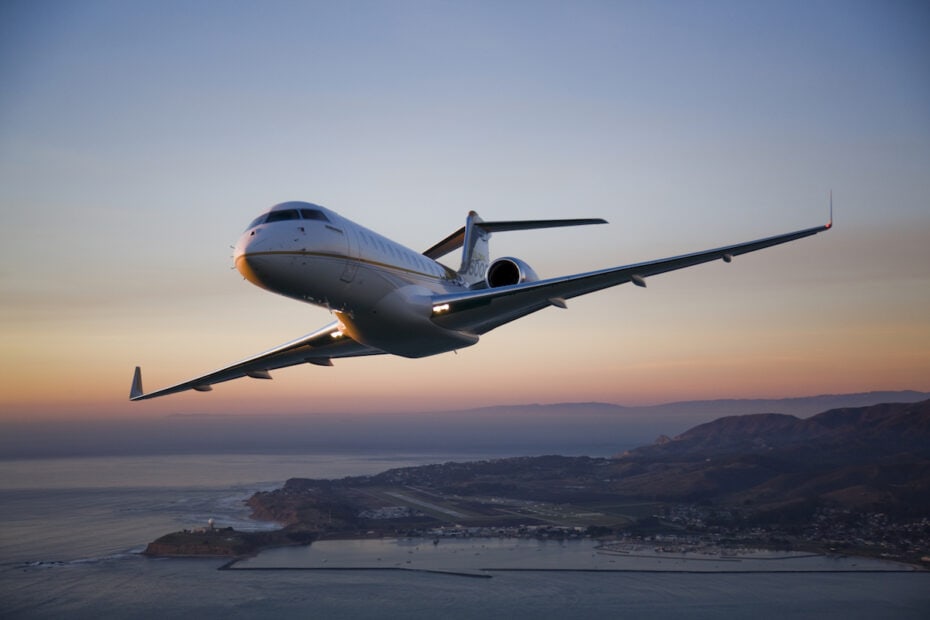 While the Challenger 650 and Global 6000 are both made by the same manufacturer, the fact that they are from different families makes them very different aircraft.

However, while the capabilities of the Global 6000 result in it beating the Challenger 650 in most metrics, the fight is closer than you might think.

View all other aircraft comparisons here.

Firstly, let’s start with raw performance. This is all about how fast these aircraft can fly. How high they can fly and how fuel efficient they are.

To start with, the Bombardier Challenger 650 is powered by two General Electric CF34-3B engines. Each engine is capable of producing up to 8,729 lbs of thrust. As a result, the total thrust output for the Challenger 650 is 17,458 lbs.

As a result, the Global 6000 can cruise faster than the Challenger. Much faster.

Of course, this is not a surprise. The Global 6000 is larger, heavier, has more powerful engines and can fly faster than the Challenger 650.

When it comes to range, the Global 6000 easily beats that Challenger 650. Visualize the range difference here.

When it comes to ground performance. the fight is somewhat closer than you might expect.

While the Global 6000 is heavier and larger, the extra thrust allows it to require just 836 feet more runway length than the Challenger 650.

When it comes to landing, the result is again extremely close. In fact, the Global 6000 is able to land in a shorter distance than the Challenger.

One of the most notable differences between the Challenger 650 and Global 6000 is the interior length.

While the width and height of these two aircraft is similar, the Global 6000’s cabin is nearly twice as long.

Officially, the Challenger 650 is capable of carrying up to 12. Whereas the Global 6000 has an official maximum passenger occupancy of 17. Of course, it is unlikely they these aircraft will ever fly with every seat being occupied.

And finally, baggage capacity. The Challenger 650 can accommodate 115 cubic feet of luggage. Meanwhile, the Global 6000 has space for up to 195 cubic feet of baggage.

Given the capabilities of the Global and the interior design, it may come as a surprise that the Global 6000 is an older aircraft model than the Challenger 650.

Of course, given that the Global 6000 is designed for longer missions than the Challenger, the cabin altitude is far lower. A lower cabin altitude will result in a more pleasant cabin environment and reduce the effects of jet lag.

However, the difference is more stark than these numbers suggest. These figures are when the aircraft are flying at their maximum altitude. For the Challenger 650 that is 41,000 feet. For the Global 6000 that is 51,000 feet.

With a total cabin volume of 1,146 cubic feet, the widest cabin in class, and Ka-band high-speed internet connectivity, the Challenger 650 jet is the perfect transportation method whether you are seeking a place to relax or a place to work.

Every aircraft features hand stitching throughout the cabin, and if you spec it, beautiful metal insert on the wide leather seats. A feature within all Challenger 650s is the absence of visible speakers in the cabin walls to provide cleaner lines throughout the cabin. All seats are filly reclining and swivel round for maximum comfort. Every component in the aircraft has been hand-built by Bombardier at their factory in Montreal, providing you with an aircraft that is unique in the sky.

The environment within the cabin can be controlled with the mobile app which connects via Bluetooth, controlling the entertainment system and the cabin environment. In the usual configuration, passengers can expect to find four facing leather club seats in the forward section of the jet, with an additional four facing seats towards the aft of the aircraft.

Along with these four seats, guests can find a four-seat divan (with specially made cushions). If you are flying through the night (or just need a nap), the forward seats and the divan can be converted into beds. Considering that the maximum cabin altitude in the Challenger 650 is 7,000 feet, you can be sure that you will arrive at your destination feeling refreshed.

The Bombardier Challenger 650 can carry up to twelve passengers, two pilots, and one flight attendant who can cater for you using the larger appliances in the galley – allowing for faster preparation of food. The galley is hidden behind an electronically controlled door.

Unsurprisingly the Global 6000 has a well-appointed interior. The interior has been designed to bring you the smoothest, most refreshing, and productive experience possible from a business jet.

Thanks to the widest cabin in its class, more room is on offer than its nearest competitor. In Bombardier’s own words; “with outstanding width, higher armrests, and an impeccably shaped backrest, the new seats allow passengers to enjoy a delightful and inviting experience, ideally suited to long-distance travel. Whether you wish to work, rest or play, time will simply fly by as you sit back in this exceptional interior.”

The galley features hardwood flooring, seats sculpted to the human body, and elegantly designed lines. Featuring Bombardier’s cabin management system you can control the whole cabin from your fingertips. The ultra-fast and intuitive media bay allows you to watch films, live stream, and display documents on the TV monitors.

Bombardier has even developed the cabin management system to be controllable from your mobile device (iOS and Android). The media bay onboard allows you to connect a host of devices, such as game consoles, Blu-ray players, and digital media players.

The 6000 has the fastest available in-flight internet connectivity worldwide based on Ka-band technology. Join video conferences, stream films, and even online game. Bombardier offers a variety of data packages. These packages allow you to find the right speed for your needs. Ka-band technology is the fastest in the air (up to 15 Mbps). Additionally, Ka-band provides the best coverage and reliability.

At the rear of the aircraft, you will find the stateroom. This adds “a sense of tranquility” with large windows providing ample natural light. The stateroom features a full-berth divan, spacious wardrobe, independent temperature control, and lavatory area.

When you are flying above the clouds on a long flight it is imperative that you eat well. The large fully-equipped galley guarantees this. Substantial storage capacity and extensive work surfaces allow for greater meal capabilities.

Finally, ensure that your crew are always performing at their best. A dedicated crew rest area will take care of this.

If you would like to configure your own Global 6000 then simply head over to Bombardier’s configurator.

When it comes to chartering these aircraft the Challenger 650 is less expensive than the Global 6000. However, please note that there are many factors that influence the price of a private jet charter. Therefore, prices will vary depending on the mission.

However, the purchase price of these aircraft starts to get really interesting when looking at their pre-owned value. These prices are according to Aircraft Bluebook.

In comparison, a five year old Global 6000 is estimated to cost $29 million. Consequently, this results in the Global 6000 will see a 47% retention of value over the same time period.

So, which aircraft is best?

Of course, this decision will ultimately come down to your mission profile.

However, in a situation where both aircraft are capable of completing the same mission, the Global 6000 is the aircraft to go for.

The Global is faster, larger and has a more advanced cabin environment. However, the Global does come with additional costs.

If you are considering purchasing one of these two aircraft, then the decision gets somewhat more complicated. Ultimately, it once again comes down to mission profile.

However, it is hard to identify a time where the Challenger 650 is the aircraft to choose, expect for when cost is the most important factor.